Former Playmate Crystal Hefner, 34, is lucky to be alive.

On Wednesday, Hefner revealed that she “almost didn’t make it through” after undergoing a “fat transfer surgery.”

Along with a pic of herself wrapped in bandages, which cover her breasts, Crystal shared, “I lost half the blood in my body and ended up in the hospital needing a blood transfusion. I've been slowly eating my way back to health since then and I am now finally feeling ok.”

Hefner noted that she underwent surgery on October 16.

A fat transfer surgery is a fat grafting procedure in which fat is taken from one part of the body and injected into an area perceived to be lacking fat. It is commonly done to enhance the butt or breasts, with fat usually removed from the abdominal area.

Referencing a past surgery, Hefner said, “I advocate for being natural since I got very ill and removed my implants and everything else toxic in my body in 2016. I should have learned my lesson the first time but I guess the universe keeps sending you the same lesson until you learn it.”

Opening up about the unattainable pressures to look perfect all the time, Crystal said, “How our culture defines beauty makes it impossible to keep up with. Women are overly sexualized. I know from the worst kind of experience. For ten years my value was based on how good my physical body looked. I was rewarded and made a living based on my outer appearance. To this day I need to write reminders of why I’m worthy that have nothing to do with my physical appearance to convince myself that I’m enough.”

“This is a huge slap on my own wrist for caving into this pressure, even now in my 30’s - as I thought I would have learned my lesson by now,” Hefner admitted.

Crystal was married to Hugh Hefner for five years until his death in 2017. Hefner died at the age of 91 after suffering cardiac arrest and respiratory failure. His death certificate also listed septicemia, a severe blood infection, and an E. coli bacterial infection as contributing factors. 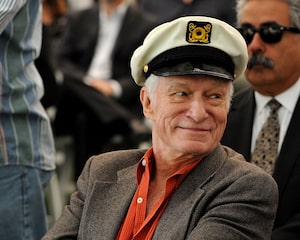 At the time of his death, Crystal said in a statement, “I am heartbroken. I am still in disbelief. He was an American hero. A pioneer. A kind and humble soul who opened up his life and home to the world.”

After signing a prenup, she inherited a $6-million home from the Playboy mogul.