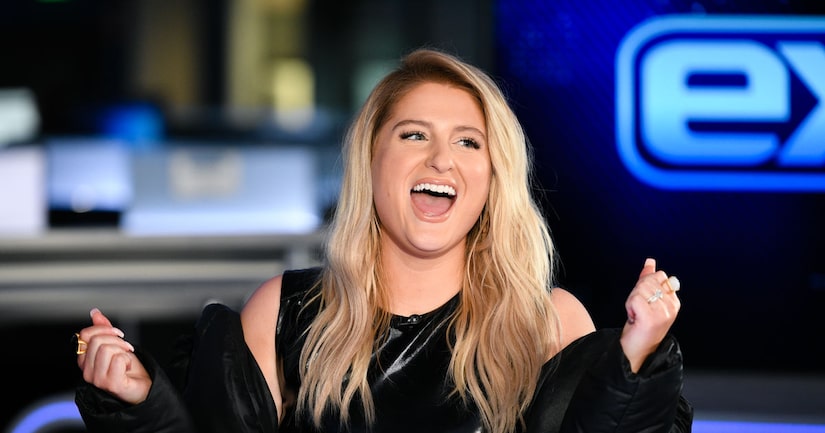 Meghan Trainor is going to be a mom, and she recently opened up about her pregnancy with “Extra's” Cheslie Kryst!

Trainor and husband Daryl Sabara are expecting a boy, and she revealed, “He started kicking yesterday so that was like the greatest day ever 'cause I was like, 'Where is he?' and he was kicking and it was beautiful.”

She doesn't plan on stopping with just one, gushing, “Yes, I want a village. I want a big, big, big, family and my husband's down, he's nodding his head.”

They are more than ready! Meghan dished, “We already have names for two of them.”

She's planning on the holidays being extra-special this year, saying, “Oh, yeah, I'm showing everyone this is the first ornament that I got… It says 'Baby's First Christmas.' He's not even going to be here, but I'll be large so he'll be here.”

Trainor, who loves the holidays, has a new Christmas album called “A Very Trainor Christmas,”

She said of making the album, “It was really nice, it was nice to escape… It reminded me what is really important, especially how scary the world is right now. It was special.”

She explained, “I also never knew the verses word for word, but it's so funny 'cause my husband did and he's like, 'Babe, you're singing it wrong, you have sing it like this,' and I'm like, 'Okay, Mr. Teacher, tell me how it's done.' That's his song.”

The star is also releasing new music like “My Kind of Present.” Meghan said, “I knew I wanted one like doo-wop and one Caribbean and one pop song. I wanted them to all be different, and that one was my, like, doo-wop… I wanted it to sound like the 'Full House' theme song, just happy, fun, and it turned into 'My Kind of Present,' like a love song, but I turned it into, like, my baby is my kind of present. Now, when I sing it, I pat my belly.”

“A Very Trainor Christmas” is out October 30.