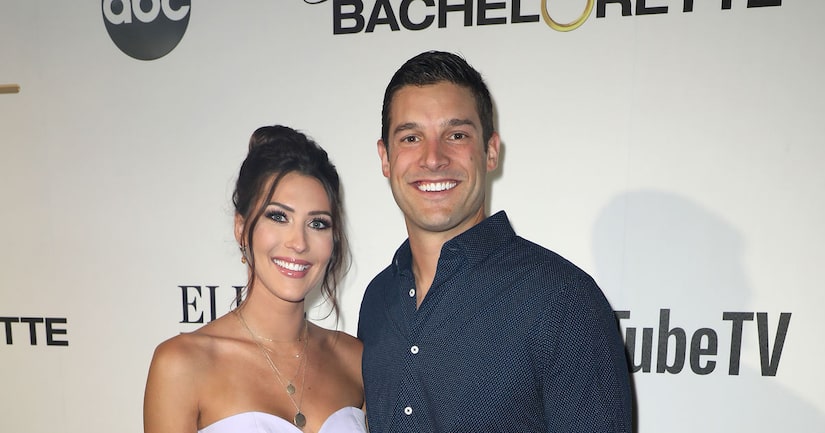 “The Bachelorette” stars Becca Kufrin, 30, and Garrett Yrigoyen, 31, have reportedly called it quits.

E! reports the two have called off their engagement just weeks after Yrigoyen showed support for the “Thin Blue Line,” a pro-police slogan, amid the Black Lives Matter movement.

A source shared, “Becca is still very upset with Garrett's comments and the controversy surrounding it. Their lifestyles don't mesh anymore. Garrett wants different things, and they came to a realization that they aren't compatible anymore."

Becca and Garrett are “currently living separately.” The insider elaborated, “Garrett is doing a backpacking trip in the wilderness with his buddies and is taking time for himself. They are trying to keep it low-key because they are still working things out, but the relationship is definitely done."

While they have been the subject of split rumors for weeks, Garrett fueled more rumors by deleting a highlight reel from his Instagram that was dedicated to Becca.

In June, Becca addressed Garett's pro-police comments during her “Bachelor Happy Hour” podcast, which she co-hosts with Rachel Lindsay. She said, “Garrett is my fiancé and I love him, and to his core, I believe that he is a good person. I don't align with and I don't agree with his [social media post]. I don't think he meant it in a malicious way. I do think it was tone-deaf, and it was the wrong time and message and sentiment."

On another episode, Becca discussed the status of their relationship, saying, “For those who are curious about my relationship with Garrett at this point, all I can say right now is that I don't know.”

She added, "I can't give anything more than that. It's something that we are trying to work through and discuss and do work on at home at this time and that's where the work will remain and that's really the best I can give you at this point."

Two years ago, Garrett sparked controversy for a series of questionable social media “likes” on Instagram. At the time, Becca reacted to the backlash surrounding Garrett by telling “Extra's” Renee Bargh, “Everyone has an opinion — that's what is so great about our country. People are entitled to their own beliefs.”

“That being said, I want to go through that entire journey with people — open to me and open to all the 28 men… I hope that after watching the entire season play out, they can stay open and get to know the guys for who they are,” Becca emphasized.

Before the final episode of her season aired, Becca was asked if she thought Garrett was racist, sexist, or intolerant. She responded, “I don't, no.”

As for if she thought this could be an issue later down the road if she picked Garrett, Becca commented, “With any guy, it's a conversation. As long as somebody is willing to have that conversation and to open and still learn and grow and be educated, that's all I could ask for.”