“The Real Housewives of Beverly Hills” star Teddi Mellencamp, 38, is keeping it real after welcoming a baby girl with husband Edwin Arroyave.

On Friday, Teddi posted a pic of her post-baby body, calling it her “Day 3 postpartum reality.”

She added, “It is unbelievable, unconditional love. It is an incredibly powerful bond that Dove and I share. It is tears of joy watching Edwin light up when he's with her.”

“It is knowing that feeling delirious will be the new norm for a while. It is humbling, to say the least - switching from the mesh “mom diaper” with ice from the hospital to high waisted compression panties at home,” Teddi shared about her highs and lows after pregnancy. “It is drinking way too much prune juice with crushed ice because you are anxiously awaiting the first post-baby 💩. It is embracing and loving this body of mine. It is lots of laughs when Cruz asks why my stomach hasn't deflated. It is a flood of emotions when multiple lactation specialists tell you that only your right breast is able to breast feed the baby due to scarring on the left.”

Along with embracing it all, Mellencamp ended her post, saying, “My baby girl is here and I love her more than words can say. We each have our own journey and this is mine.”

Mellencamp is also the mother of son Cruz, 5, and daughter Slate, 7, who have “gently, lovingly & eagerly jump into their new found big sibling roles.”

The day before, Teddi revealed that they named their newborn, Dove.

Last month, Teddi celebrated her baby's arrival at a baby shower. Referencing their daughter Slate, 6, and his daughter Isabella, 10, from a previous relationship, she posted pics, writing on Instagram, “Thank you to my @goallinbyteddi tribe for showering me today and an even bigger thank you to Slate and Bella for making the day even more special.💕💕💕.”

Mellencamp announced she was pregnant in September. At the time, she told Us Weekly, “I'm in my second trimester, 14 weeks. Everything's good and I'm in the clear, so I'm just starting to get to that point where I'm sharing with everybody. Plus, now I have a bump, so there's not much more hiding I'll be able to do!” 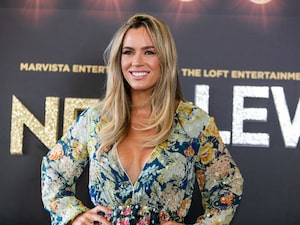 The pregnancy was a surprise for the reality star, who is also an ALL IN by Teddi accountability coach.

She revealed that after conceiving Slate and Cruz via IVF, Arroyave, founder of Skyline Security Management, didn't want her to see her go through the “brutal” treatments again.

Teddi, the daughter of singer John Mellencamp, revealed, “It was so many rounds, but this time we really weren't doing anything! I was on vacation! Just having fun with my family! It was a complete surprise. I didn't even know I was because I didn't have a regular cycle.”