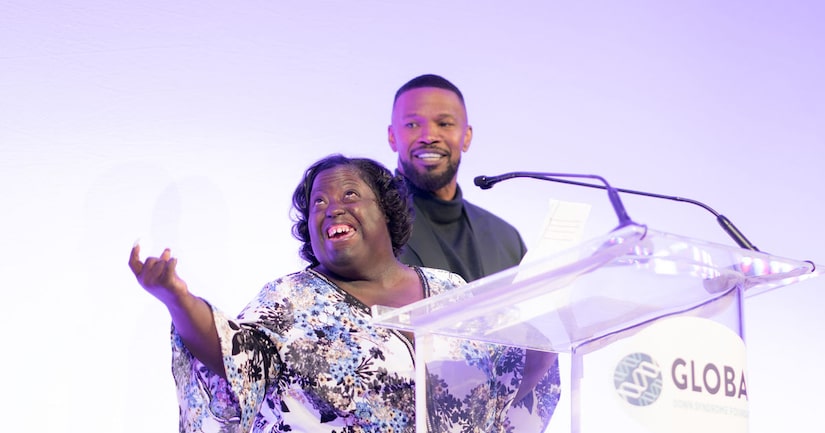 Only “Extra” was with Oscar winner Jamie Foxx and his little sister DeOndra at the Global Down Syndrome Foundation's annual Be Beautiful Be Yourself Fundraiser in Denver.

Their incredible relationship was put on display on- and offstage. Global Down Syndrome Foundation president Michelle Sie Whitten pointed out to the brother and sister duo backstage, “When you spoke and Deondra spoke… you could hear a pin drop, and that was in front of 1,400 people.”

Jamie gushed over DeOndra, saying, “What's great about DeOndra is that when people meet her they sorta lose that apprehension, you know, when they see people with special needs… DeOndra just blows right past that... I always refer to when she was in a music video with us, the way she danced and everything like that, and that's a testament to her mom."

Jamie was referencing her appearance in his 2009 music video for “Blame It.”

He went on to say, “Mom asked the kids at her school to just look out for her but treat her normal, you know what I'm saying? And she got an opportunity to do normal things. She's not put off in the corner somewhere... 'Just because you're special needs you gotta be over there doing special things,' you know? She's had a regular life.”

Jamie's famous friends are even fans of DeOndra. He smiled, adding, “Chris Brown, Trey Songz, the people that would come by the house and she breaks out in a dance battle… it turns the place out."

DeOndra also opened up on her future plans, sharing, “I want a boyfriend. I wanna get married pretty soon.”

Does she have someone she is eyeing? DeOndra revealed, “I hope I get married to Chris Brown because he's my main secret crush.”

Jamie pointed to the camera, commenting, “Well, it's not a secret now.”

Foxx also dished on his new film, “Just Mercy,” which centers on a civil rights defense attorney who fought to free a condemned death row prisoner. Foxx said, “It resonated with our family because at one point our father was taken away from us for something that was, you know, seems silly and, you know, and so we lost him for a while."

DeOndra is always supporting her brother, sharing, “It just made me cry when I was talking about seeing that movie. It's hard, but Jamie deserves all the support and that made me really happy — I can't wait to see that movie.”

Jamie chimed in, “Well, we support you," to which DeOndra responded, “And I wanna thank you for supporting me.”