John Stamos is ready to play Chef Louis in "The Little Mermaid Live!"

"Extra's" Jenn Lahmers caught up with the actor Monday to talk about the musical, and to get an update on his adorable son Billy.

Stamos joked of 17-month-old Billy, "His first two words have been 'trust fund'… he has a good sense of humor… That's the milestone I like."

He also revealed a cringeworthy story about Billy that is so relatable to any parent! "We were doing an episode of 'Fuller House,' and I have a friend — Josh Peck — on... His wife brings his son Max and my wife brings Billy, who's never done a bad thing in his life. They were taking a picture and he bites Max [on the face]… It was horrifying! It was the first time I was disappointed in my son. It was a weird feeling."

He joked, "Josh now owns my house in Hidden Hills and I'm looking for a condo in Encino."

So will Billy watch "The Little Mermaid Live!" starring his daddy? "Well, I tried to get him to watch 'The Little Mermaid,' the movie, and he just goes, 'Coco, Coco, Coco.' He loves 'Coco.' That's what he dressed up as for Halloween — Coco."

Stamos teased the new TV special, saying, "Everything you love about 'The Little Mermaid' is still intact." He added that fans can look forward to "special, extra, new memories with these live numbers."

John laughed when Jenn asked if he was concerned that Disney thought he would make the perfect murderous French chef.

"Yeah. I wonder what happened to, you know, Prince Eric?... I did [Chef Louis] at the Hollywood Bowl. I didn't know what I was going to do with it… A couple hours before, I said to my assistant, 'Go get me a big mustache, give me a beret and some guyliner'… It's just gotten deeper and deeper, and he's insane. I'm just playing him completely nuts."

Stamos added, "The beauty of this, too, is that there's really audience participation."

John also crashed our interview with his co-star Shaggy. It was actually the first time they had met. Watch! 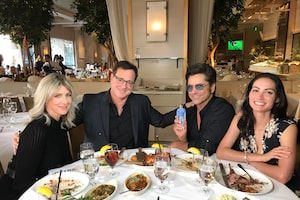 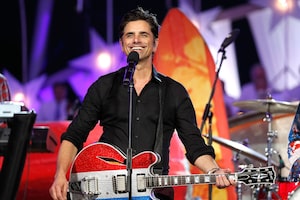 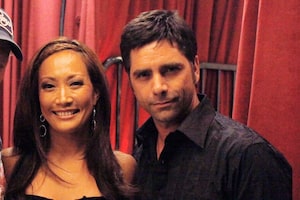