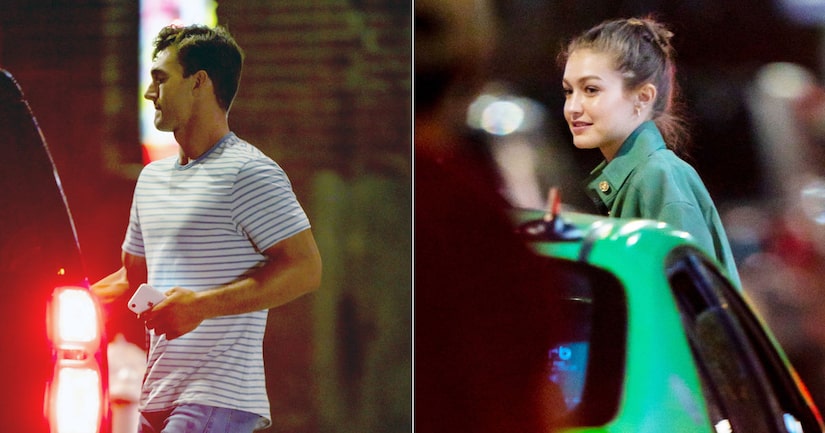 “The Bachelorette” favorite Tyler Cameron is making the rounds!

Over the weekend, Cameron, 26, was spotted hanging out with supermodel Gigi Hadid, 24, in New York City, just days after spending the night at Hannah Brown's apartment in Los Angeles.

For their casual night out, Gigi wore a green coat, while Tyler opted for a striped tee and jeans.

Page Six reports Tyler and Gigi spent time together at Dumbo House in Brooklyn before heading to her apartment. While they attempted to throw off the photogs by leaving separately, it has been reported that they got into the same car.

A source shared, “She came out of the main entrance by Almondine bakery. He walked around to [the] alley on the left by Smile to Go. Her car picked him up there. They then went into the garage at her apartment.”

The insider claimed that they hung out until 2 a.m.

The two had people talking after a photo taken of them from behind was posted on Twitter. There was no sign of PDA though!

Just a few weeks ago, Gigi and Tyler followed each other on Instagram, leading many to speculate whether they would date in the near future.

Another insider told E! News, "Tyler and Gigi actually have a few mutual friends in the modeling industry, but met on Instagram. She knew of him before he got any wind of fame from the 'Bachelorette.' Gigi is definitely interested in Tyler. They met for drinks last night at Soho and they got along really well. It was very casual but they were laughing and had a very engaged conversation."

"Gigi thinks Tyler is really cute and nice and liked that he was a good listener," the source continued. "They have been texting for weeks and have plans to hangout again while Tyler is in NYC. They are both taking things slow but have both made it clear they are interested in each other."

Last week, TMZ obtained photos of Tyler leaving Hannah's place. A source told E! News, “Tyler got to Hannah's place around 9 p.m. and they stayed in. He spent the night with her and left this morning after 10 a.m. She walked him out to his car and they hugged and kissed. He had an overnight bag and they looked very happy together.” The sighting came just days after Hannah asked Tyler out for drinks after news broke of her broken engagement with Jed Wyatt. She told her Instagram followers, “Yes, the drink is happening. No, you're not invited."

After her reunion with Tyler on “The Bachelorette's” finale, Hannah opened up to “Extra” about what could come in the future, saying, “I am excited to have a relationship with him in some capacity... I think we both support and admire each other. I want to be a part of his life and I think he wants to be a part of mine. How, I don't think we know just yet... but yeah, it'll be good to see him."

We'll have to see how his relationship with Gigi and Hannah progresses. Tyler is also a favorite to be the Bachelor next season!

Gigi has been in an on-again, off-again relationship with Zayn Malik since 2015.