Singer Shania Twain is “going back to Vegas!”

The top-selling female country artist of all time spoke with “Extra” about her new residency and her recovery from Lyme disease.

Shania's new residency, “Shania Twain: Let's Go,” is set to open this December at the Zappo's Theater inside Planet Hollywood Resort and Casino in Las Vegas. She dished, “Of course I will play the classics… I think probably 'That Don't Impress Me Much' is one of my favorite ones to do.”

The five-time Grammy winner added, “But there's always that romantic part, too, in the shows. A lot of people have gotten married to my music, 'You're Still the One.'”

Her first residency was at the Colosseum at Caesars Palace from 2012-2014.

Shania also opened up about her battle with Lyme disease, which caused her to lose her voice for several years. She said, “I had to have an operation that was very intense and it's an open-throat operation, very different from a vocal cord operation… and I had to have two of them, so that was really, really, really tough and I survived that, meaning emotionally I survived, and am just ready to keep going.”

The 53-year-old also got candid about her fears of not being able to sing again. She explained, “When you're a singer and it's your voice, it is just a terrible, terrible feeling. It was a great, great loss, so I had to come to terms with losing the voice that I had and rediscovering my new one. It's been a long, a really rewarding, journey.”

Shania pointed out that some of the vocal damage is permanent and will get worse over time. She shared, “What I've learned in the interim through therapy is how to manipulate my voice to get it to do what I want it to do or at least close enough that I... don't want to give up, so I'm willing, you know, you just gotta be willing and give in to change and you have to accept that you don't always have to be the same and that's what I have to do, and I'm embracing that.”

Twain took a 15-year hiatus from music until 2017, when she released her single “Life's About to Get Good.” 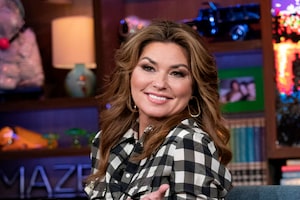 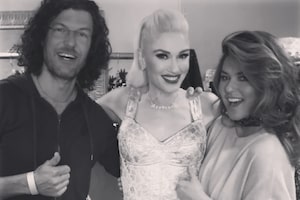 Gwen Stefani Dishes on Her Hangout with Shania Twain