“Big Bang Theory” star Johnny Galecki is going to be a dad for the first time!

Johnny, 44, is expecting a child with his girlfriend Alaina Meyer, 22. In a statement, the couple shared on Instagram, “We are absolutely over the moon to announce that we will soon be welcoming a little one into this crazy and wonderful world.”

The baby news comes less than a year after Johnny and Alaina became romantically involved. In September, he posted a pic of himself gazing into her eyes. He wrote, “Last night was wonderful. Thank you #jefferykatzenberg.” It is unknown how they met. 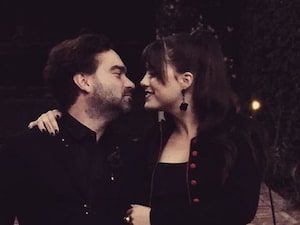 Johnny Galecki Is Dating a Much Younger Woman — Who’s the Lucky Girl?

A few months ago, Meyer shut down engagement rumors after he posted a pic of them wearing matching rings. When an Instagram user asked if they were married, she captioned a similar pic, “💝 #notmarried.”

In February, Meyer's half-brother, Evan Bozajian, told RadarOnline.com that Johnny had asked their father for permission to marry her. Evan claimed, “My dad is old-fashioned so Johnny figured asking him for my sister's hand in marriage would be the respectful thing to do instead of outright [proposing] on his own.”

Along with saying that his dad approved, Evan noted that Johnny is a “pretty good guy” and is “close to the family.”

Galecki just finished working on the final season of “Big Bang Theory,” which has his character Leonard changing his mind about having a kid with Kaley Cuoco's character Penny.

Earlier this week, “Extra” spoke with Kaley about filming the series finale. She dished, “Honestly, I couldn't have asked for a better night. It was a beautiful night. The script was fantastic, the audience, it couldn't have been better… It was perfection and a memory I'll have for the rest of my life.” Watch!

She pointed out that she and Johnny will host an “after the finale” special. Cuoco explained that showrunner Chuck Lorre “wanted us to do a behind-the-scenes episode about taking you behind what goes on at 'Big Bang,' and our crew, what makes the show tick… Should be a great little behind-the-curtain… and it was a way for Johnny and I to say goodbye.”

It appears Johnny's baby will arrive after the series finale, which airs May 16. 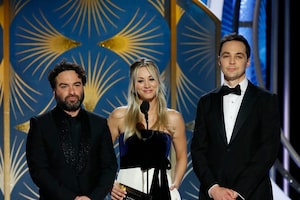 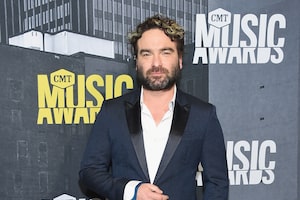 Johnny Galecki Opens Up on the Fire That Destroyed His Home 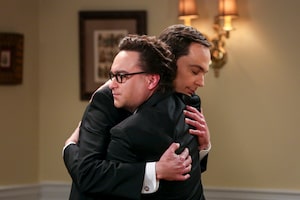