“America's Next Top Model” contestant Jael Strauss died on Tuesday, her family confirmed to TMZ. The reality star was 34.

Jael went on, "It has aggressively spread throughout my body and is incurable. With treatment it may prolong my life longer than the 'few months' doctors said I could make it. I don't want to die.”

Strauss ended chemotherapy around Halloween and entered hospice care on Thanksgiving. At the time she posted on Facebook, "First night in hospice. So many things I never knew about life. Or death. So many things."

TMZ reports Jael's condition worsened on Monday and her family had stopped allowing visitors. She passed away around 11 a.m. on Tuesday.

Jael appeared on Cycle 8 of “ANTM” in 2007, but made headlines again in 2012 when Dr. Phil staged an intervention for her.

Strauss had struggled with drug addiction but celebrated five years of sobriety in August 2018.

TMZ reports that Jael spent her final months helping others seeking sobriety at Solstice Recovery Foundation near Austin. An employee told the site that the former model volunteered with the patients there, and organized fundraisers to help pay for their treatment. Strauss would also share her story to inspire others.

When Jael was diagnosed with cancer, her friends started a fundraiser for her and raised $8,000 to pay for her medical care. At one point, friends who donated had the option of getting a tattoo in her honor, and TMZ says 20 people got the ink. 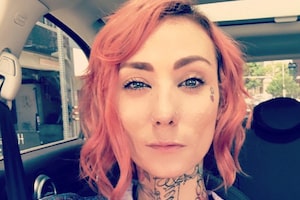