Months after her painful fall, country singer Carrie Underwood is still not ready to show her face. 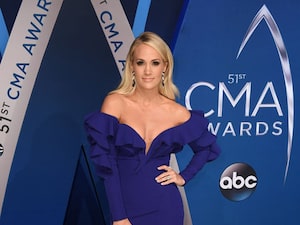 In a new selfie, Carrie is hiding part of her face while promoting the End It Movement organization with husband Mike Fisher. She captioned the photo, “Together, we're in it to end it! Help us shine a light on modern day slavery. @enditmovement #enditmovement.”

Last week, Mike slammed breakup rumors on Instagram. When a fan wrote that they were “praying for you and Carrie,” the unretired NFL player said, “We've never been better. Thanks."

Carrie and Mike have been married since 2010.