Actress Jane Seymour is stunning a new feature for Playboy!

Seymour was photographed and interviewed at her Malibu home. In the feature, she opened up about her family, career, and how she feels at 67.

Jane says she has been able to maintain her beauty for decades without doing anything. She revealed, “I haven't done any surgeries or injections or anything. I haven't done any of it. So I still look like 'me.' Every day I'm kind of tempted, but then I look at people I know and I don't [recognize] them. I'm authentically being me. That's important to me.”

Seymour recently told “Extra's” Renee Bargh that she doesn't even get facials, joking that she's “earning” her wrinkles. Watch!

In her sixties, Seymour is feeling better than ever. She commented, “I feel much sexier now than I ever did when I was younger. Then, I was like, 'Oh, gosh, I'm supposed to be sexy. What is that?!' There's an enormous freedom in having lived as long as I have. Like my father used to say, I'm comfortable in my own skin.”

Seymour also recounted her own experience with the #MeToo movement with a producer in the 1970s. At the time, a producer wanted her to come to his home and watch a screen test, but tried to make sexual advances. After feeling uncomfortable, she asked him to get her a cab. She said, “He put me in a car and said, 'If anyone knows you ever came here, if you ever tell anyone, ever, I'll guarantee you never work again anywhere on the planet.' And he had that power. I got in the cab and cried, terrified.” For more on Jane, visit Playboy.com! 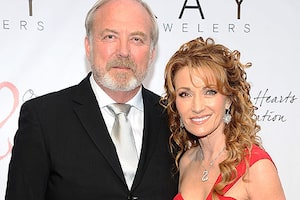