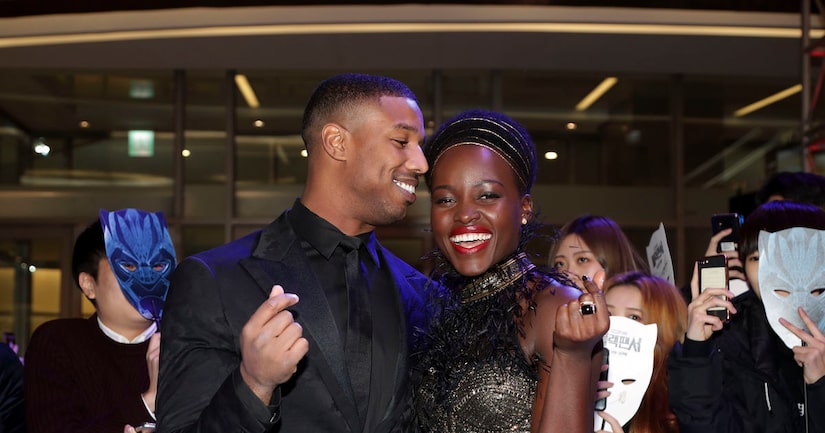 Earlier this week, Lupita and Michael were seen flirting backstage at “The View” in a video posted on her Twitter as they promoted their blockbuster film.

As he was doing a push-up, Lupita joked, “Stay down.” Michael lost a bet to Lupita and has to do “on-call push-ups” when she requests them.

In response to the video, Michael said in a now-deleted tweet to Lupita, “Bring them chocolate cakes back. You ready for round 2? #youknowyouwantthis.”

Last week, Michael did an impromptu push-up for Lupita at the Calvin Klein show at New York Fashion Week. He emphasized, “Never bet with her ever.”

Fans are shipping the two co-stars like crazy on Twitter. Check out some of the social media reactions.

I want Michael B Jordan & Lupita to became an actual thing, not just on red carpet appearances.

Can yall get together already??? Do it for the culture!!! https://t.co/8qn3FKlnOr

I SHIP Michael B Jordan and Lupita Nyong'o and have spent way too much time evaluating their chemistry via social media posts 👀 it all started with this Instagram. pic.twitter.com/3cHQSFuNdy

THE WAY THEY HUG AND HOW LUPITA TOUCHES HIS FACE I LOVE THEM I LOVE THEM SO MUCH OH MY GODDFSBVDFS https://t.co/vfQkLuRqub

Jordan seemed to shut down the shippers, tweeting, “Aight y'all know wassup lmao 🤦🏾‍♂️ playing #safeword with @SteeloBrim who doesn't care about life and took the L hahaa.”

The new MTV show "SafeWord" is described on their site as “famous friends become frenemies through a series of fun and daring games.”

Michael was recently rumored to be dating social media influencer Ashlyn Castro, who posted a Snapchat pic of hands interlocked, tagging him.

In the past, Lupita has been coy about her dating life, telling Vogue, “You can ask, but you definitely won't get an answer. There have been rumors and rumors and rumors about my love life. That's the one area that I really like to hold close to my heart.”

Michael recently told WSJ Magazine that he was “dating, but ya know, technically single.”