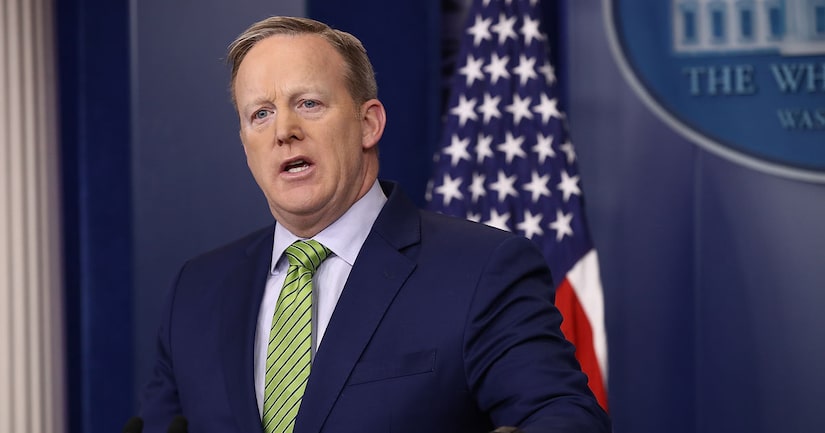 The White House press secretary gave his take on Melissa McCarthy's impression of him in a surprise "SNL" skit, in which McCarthy poked fun at his tightly wound demeanor in press conferences.

Explaining that he'd first heard about the sketch while leaving church Sunday morning, Spicer said his texts had been blowing up so much he thought there must be a national emergency.

Spicer told "Extra" exclusively he felt the impression was a little exaggerated. His advice was that McCarthy "needs to slow down on the gum chewing; way too many pieces in there." Though he thought it was a really "funny" show, he felt that McCarthy "could dial back" a bit.

Last night, Alec Baldwin was back as President Trump as well. As for what he thought of Alec's portrayal of the President, Spicer had the same feelings as the Leader of the Free World, calling it “mean.” Spicer said, "Alec has gone from funny to mean, and that's unfortunate. 'SNL' used to be really funny. There's a streak of meanness now that they've crossed over to mean."

Just before the game, Trump sat down for an interview with Fox News' Bill O'Reilly, which Spicer thought was "great."

The press secretary said he thinks President Trump is doing well, despite protests happening across the country for a third straight week. “The President's really excited about the progress he's made in creating jobs and helping veterans," Spicer said. "Protests are what make this country great." He went on to criticize the frequency of the protests, noting, "Protesting is starting to become a profession for some on the left. Again, that's their right to do, but Americans need to understand it's not organic as it may seem sometimes."

Spicer sat with Vice President Mike Pence at the big game, and revealed he was rooting for the Pats. As for President Trump, Spicer revealed, "The President has been close friends with [head coach of the New England Patriots Bill] Belichick, and they talked several times these past few months. He'll be watching tonight."