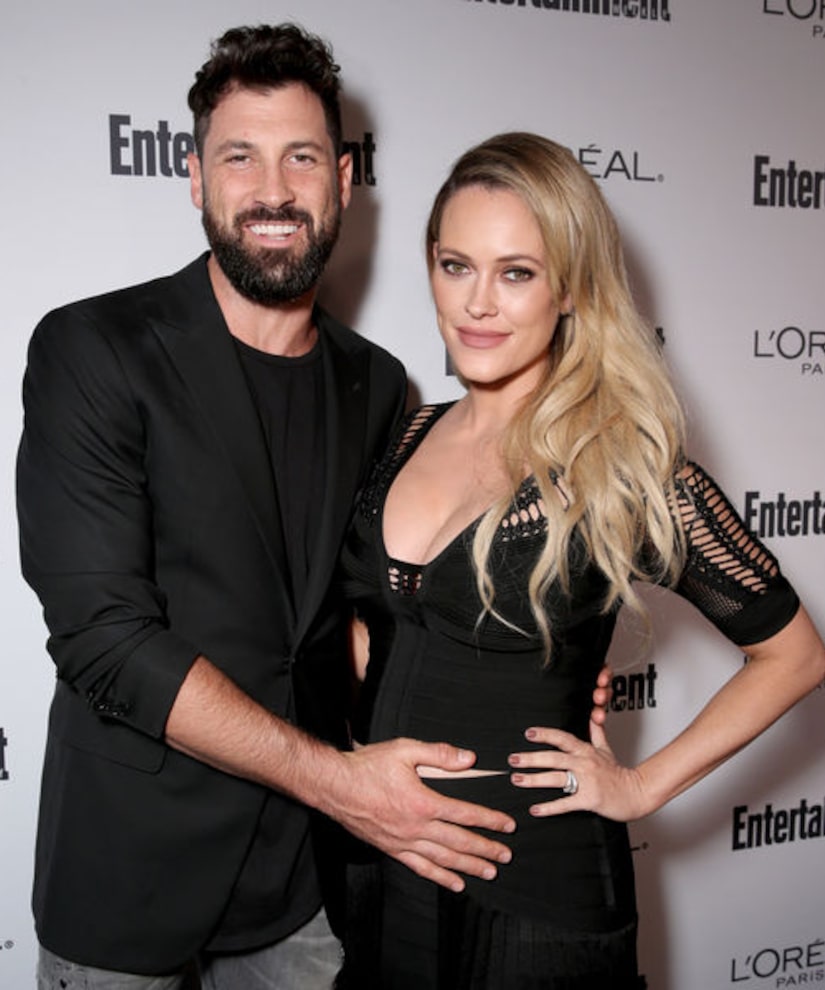 Maksim Chmerkovskiy and Peta Murgatroyd always planned to get married on July 8, 2017 — and they told "Extra" they are sticking to the date even though Peta got pregnant!

"Extra's" Terri Seymour was inside Entertainment Weekly's star-studded pre-Emmys party Friday night, where she caught up with the glowing couple, who looked sexy in black. Peta said they decided not to hold off on planning their wedding because, “That was the original date and we kept it, even though I got pregnant in-between.” Maks chimed in that they are going to have a "little, tiny ring bearer" on hand, their son, who Peta noted would be six months old by then.

The couple revealed they are not yet 100% on a name for their baby boy, saying Maks wants something "unique." He joked that because a New York friend just had a baby and gave their own newborn one of the couple's potential names for their son, "Two Apples in the same group is going to be weird."

Peta updated Terri on how the pregnancy is going after seeking relief by taking a much-needed seat at the event. "This feels amazing; my feet are on fire right now!" she said. The pro dancer also said she is keeping her fashion-forward ways while preggers, noting that she refuses to give up heels. "You have to still keep some standard," she said, bursting into laughter. "I can't be here in flip-flops." Maks disagreed, saying, "That would be fun... like, little fuzzy ones."

Peta, who is due in January, told "Extra" she is feeling good. "No sickness — that was all in the first trimester. To be honest, I've had a really amazing pregnancy... I wouldn't say it's easy, but I've been very lucky with what's been happening with me." She added that she has gotten some energy back and goes to sleep around 10:30 p.m., even though, "The first trimester was exhaustion central."

Maks raved about his glowing fiancée when Terri asked Maks if he thinks Peta is getting more and more beautiful every day. "For sure," he said, "but she doesn't believe me when I say. She thinks I read a book and I'm just doing the right thing." He went on, “I wake up and I really, truly think she's gorgeous."

While Peta focuses on impending motherhood, Maks is of course back on this season of "Dancing with the Stars," strutting his stuff with partner Amber Rose. "It's good, amazing, it's great," he said of being back on the show that made him famous. "I forgot how much you're involved in things other than just your partner." He said he is doing his best with a "partner that isn't as dance-able as we all thought she'd be, but she has an amazing work ethic and gives me the time that I ask for."

Following last week's on-air scare, when anti-Ryan Lochte protesters interrupted the live show, Peta confirmed the show has told her security will be enhanced. "I spoke to the security guards and they said they were going to definitely amp it up for next week," she said. Maks joked everyone would be wearing helmets this week.