Last night, Blake Shelton and Gwen Stefani took PDA to a whole other level on "The Voice.”

Gwen took to Twitter to share a cute selfie of Blake biting her arm while Adam Levine and Pharrell Williams stood alongside them.

Not only did Blake playfully bite her, he also kissed her in front of the audience during the show. A source told People, "Blake came up to Gwen from behind and kissed her on the head. It was so cute! She turned around looking semi-shocked that he did that.”

On the same night, Blake performed his song “Gonna” and received a standing ovation from Gwen. Just last week, Gwen performed her new single “Used to Love You,” which was inspired by her split from Gavin Rossdale. 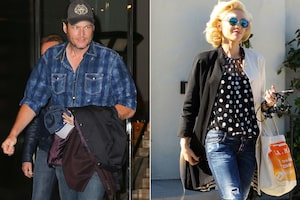