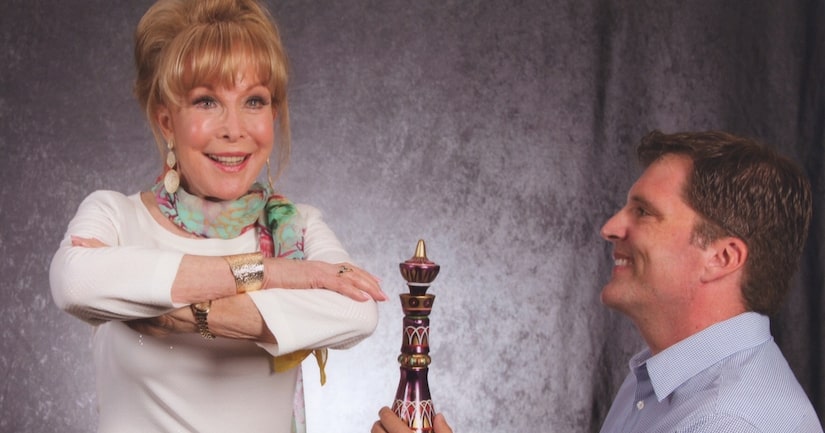 People are still dreaming of Jeannie. Nearly 50 years have passed since Barbara Eden first popped out of that TV bottle, and she says her time on the classic '60s sitcom "I Dream of Jeannie" “were the happiest years of my life.”

Now 83, Eden can still conjure up a crowd in a blink of a Jeannie eye, as I-Dreamers lined up hour after hour to meet Barbara at a recent fan-centric Hollywood Show in Los Angeles.

Sitting down with “Extra,” Eden told us, "They know more about the show than I do. They remember and they're still watching so that makes my heart grow very warm."

What they may not know is that she can still rock Jeannie's iconic, pink and red genie outfit. "I have one in my costume closet at home. I don't have any of the original costumes. They're gone."

Could a show about a woman and her "master" make its mark in today's politically correct times? Eden laughed, "Of course. She was a genie, for goodness sakes! She wasn't a housewife. I think it is still timely. The space mission is still timely. We're all in uniform so it isn't too dated."

Barbara also spoke about her co-star Larry Hagman, who passed away in 2012. The actress said, "I thought he'd live forever, and I had just been with him in Australia the year before. He was healthy and strong and talking about doing ('Dallas') JR again. It was just a huge shock when I found out that he had cancer."

The TV Landers at the Hollywood Show have their own Jeannie mementos: photos, DVDs, even replicas of the Jeannie bottle for Barbara to sign. The oddest thing she autographed? "Someone's leg where they had Jeannine tattooed."