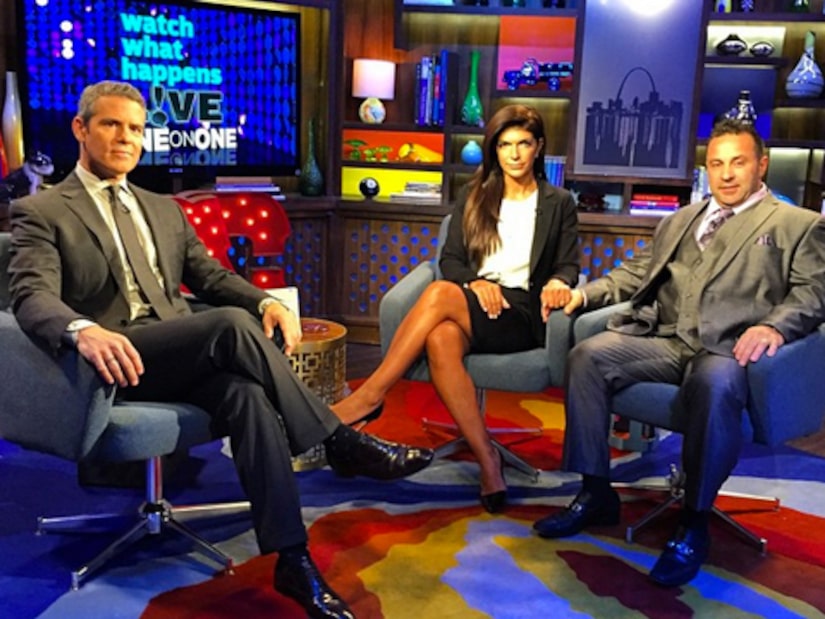 “Extra’s” AJ Calloway caught up with Andy Cohen in NYC on Monday, where he was hosting a celebrity dinner to benefit Friends in Deed, and the TV host talked about his upcoming “Watch What Happens Live” interview with Teresa and Joe Giudice, who were recently sentenced for bank and bankruptcy fraud.

Despite reports the “Real Housewives of New Jersey” stars would divorce after Joe finishes his 41-month sentence, Cohen said Teresa and Joe are “a pretty solid unit.”

Andy explained, “They seem very unified. I asked Teresa if she blames Joe for her sentence and term, and what she says is pretty interesting… we also talked about whether he has a problem with alcohol and some other allegations that they made in court about the show.”

Cohen is also setting the record straight about the “RHONJ” reunion show, which taped on Sunday. “The reunion show was really intense. There were a lot of rumors online that Teresa showed up four hours late, and that’s not true.”

The Bravo host added, “It was a typical reunion show, which means it was really dramatic, emotional, intense. Obviously there was an undercurrent of something incredibly serious that’d just happened with Teresa, but we all got through it.”

Andy did say Teresa and Joe arrived to the taping separately. “It was because we needed her first thing and didn’t need him for a few hours, so they did arrive separately, but they left together.”

As for the future of Teresa and Joe on the “Real Housewives of New Jersey,” Cohen said no decision has been made.

The first part of the Giudices’ interview on “Watch What Happens Live” aired on Monday, and Part 2 airs Thursday night on Bravo.