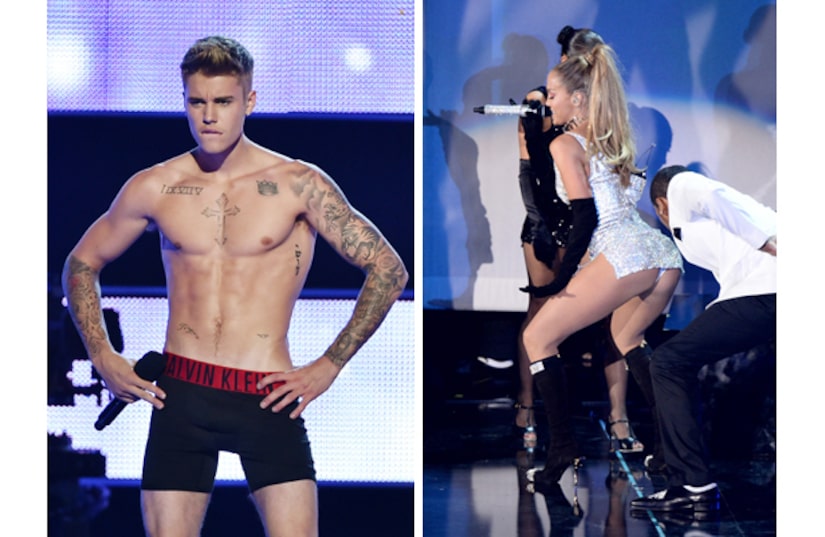 It was a night of boos and booty at the Fashion Rocks concert at Barclay Center in Brooklyn on Tuesday. View the gallery!

Justin Bieber was a surprise presenter at the event, but the audience wasn't all that jazzed to see him.

As he took the stage with model Laura Stone, the crowd booed, but the Biebs took it in stride, telling Laura, “I don't feel comfortable unless I'm in my Calvins. So, what's up? Is that cool?”

He then stripped down to his Calvin Klein boxers, before striking a pose to show off his abs!

Justin asked the crowd, “Is that better?”

Afterward he tweeted a Vine video and the message, "Grandma always said kill 'em with kindness... and then strip on live national tv. Lol.”

Bieber wasn't the only one making headlines at the Fashion Rocks show. Jennifer Lopez took the stage in a barely-there metallic dress and shook her famous booty to the song… “Booty”!

To the delight of the crowd, J.Lo also left very little to the imagination and spent most of her performance with her backside to the audience! Watch!

Lopez had a little competition. Nicki Minaj showed off her assets too, twerking to her new hit, “Anaconda.” Watch!