Comedy legend Joan Rivers, who died on Thursday, often joked about her death… and she also detailed what she wanted for her funeral. 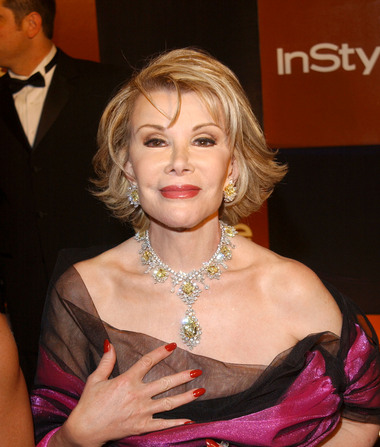 Getty
In her 2012 bestseller “I Hate Everyone… Starting with Me,” the funnylady quipped, “When I die (and yes, Melissa, that day will come; and yes, Melissa, everything’s in your name), I want my funeral to be a huge showbiz affair with lights, cameras, action… I want Craft services, I want paparazzi and I want publicists making a scene! I want it to be Hollywood all the way.”

Listen to the excerpt from Joan's audio book below!

She added, “I don’t want some rabbi rambling on; I want Meryl Streep crying, in five different accents. I don’t want a eulogy; I want Bobby Vinton to pick up my head and sing ‘Mr. Lonely.’ I want to look gorgeous, better than I do alive. I want to be buried in a Valentino gown and I want Harry Winston to make me a toe tag. And I want a wind machine so that even in the casket my hair is blowing just like Beyoncé’s .”

All joking aside, many celebs expressed their condolences and paid tribute to Rivers, including her rabbi. Rabbi Joshua M. Davidson said in a statement, “It is a terribly sad day for all of us. We mourn with her family, friends and all those millions to whom she brought laughter and joy.”

A funeral for Rivers will be held on Sunday at Temple Emanu-El in NYC.