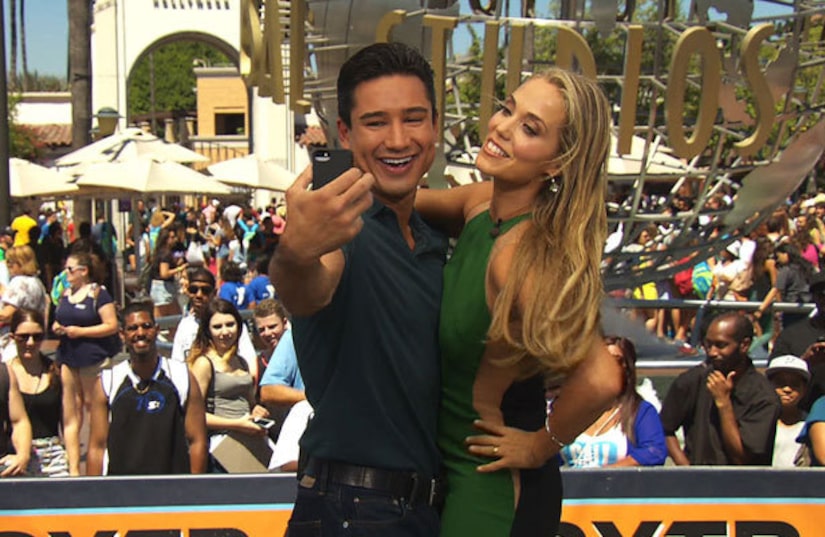 It's a "Saved by the Bell" reunion at "Extra," with actress Elizabeth Berkley joining former co-star Mario Lopez at Universal Studios Hollywood as our special co-host!

The two chatted about why they have no desire to see the upcoming unauthorized "Saved by the Bell" TV movie set to air on Lifetime.

Mario said, “Now, Elizabeth, you made headlines this week when you said you aren't the least bit curious about the ‘Saved by the Bell’ TV movie that's coming out, and I have to say, I’ve got to agree with you.”

Elizabeth asked, “You share that with me?” Mario replied, “One hundred percent.”

Elizabeth continued, “You know what, I feel like we know the lives we led, and I think that they're taking it off of the unauthorized book by Dustin Diamond… so it's a little silly to give credence to that when we know the innocence and the joy that we shared.”

Berkley, whose son Sky Cole is 22 months, also spoke out about the way the media refers to pregnant women. Mario asked, “Not a big fan of the terms 'ready to burst'… or ballooning?”

Elizabeth responded, “No, and as a husband to a beautiful woman, and you've seen her go through it twice, I just feel like in our culture, people aren't really honoring a woman's journey through that time, it's really about, like bump watch, let's see how big she's getting. At what point did it become this kind of, like, sporting event to kind of judge where someone's at?"

Elizabeth continued, "I think we need to honor women more during that time.”

The two also had a lot fun with each other taking a mock prom selfie, watch!