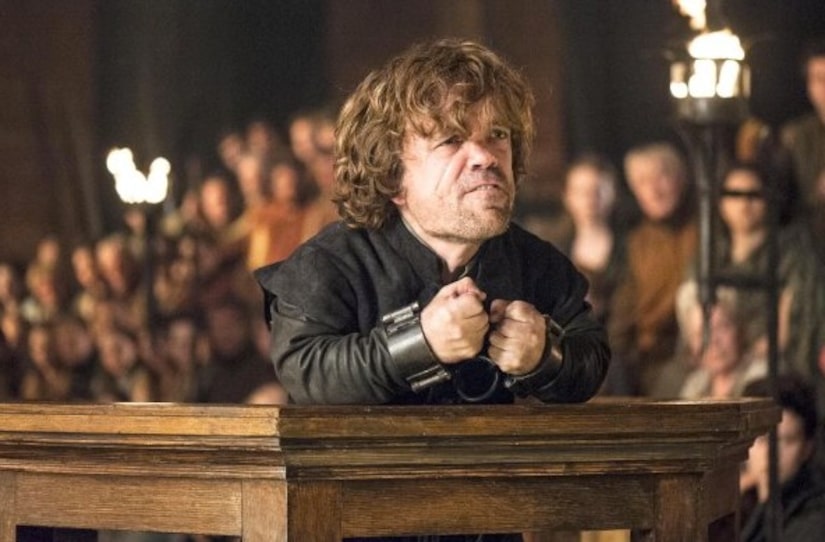 “Game of Thrones” Season 4 has been a wild ride, but Sunday night's season finale on HBO brought even more murder and mayhem. We've got the minute-by-minute recap!

10:05PM: Last parting shot... Arya on her white horse, riding to a port. She meets a captain preparing to sail for Bravos. When he refuses to take her, Arya presents him the coin she received from Jaqen H'ghar (the badass assassin from Harrenhal who could change his face). She tells him in High Valyrian, "valar morghulis" (all men must die). He responds "valar dohaeris" (all men must serve) and offers her a cabin for her journey. Is she off to find Jaqen H'ghar?

10:04PM: Lord Varys greets Tyrion outside the privvy... and helps him onto a ship. As they sail off, the bells are ringing at King's Landing, announcing Tywin's death. Can we say "Yay!"?

10:00PM: Tyrion's really mad now. He takes a cross bow and finds Tywin in the privvy (if that's what you call it in Westeros). It's a tense scene. Tyrion says he loved Shae and Tywin calls her a whore. "Call her that one more time." Then our beloved Tyrion shoots Tywin with two arrows! Go, Tyrion!

9:57PM: But wait... Tyrion can't leave just yet. First, he goes to his father's chambers and there, in bed, is Shae, his one-time love. Oh wow, she was betraying Tyrion the whole time! He definitely has to kill her. Bye, Shae.

9:56PM: Is it Tyrion's time to die? No! Jamie Lannister is going to help him escape (we knew it). They share a nice brotherly moment.

9:50PM: Probably one of the best fights EVER on "GoT"! Brienne finally knocks the Hound off the mountain, but is he dead? Nope, not yet, but he's seriously injured. Arya finds him. Hound tells her to go find Brienne and asks Arya to put him out of misery. "I'm on your list." But she won't do it. Instead, she takes his gold.

9:45PM: Brienne finds Arya! Of course, The Hound isn't pleased to see this new woman. He knows she's friends with Jamie Lannister. Brienne wants to take Arya to safety, as she promised. The Hound has other ideas. Sword fight! Conflicted because we don't want either one of them to die!

9:43PM: The girl leads them to an old man. Bran says he's the three-eyed raven, but he's kind of Gandalf like. "You've come to me at last, Brandon Stark... Jojen died so you can find what you've lost... you'll never walk again, but you will fly." Things are getting real now.

9:40PM: Who the hell just blasted the skeletons? Some weird little kid appears and tells them to follow her into a cave. The First Men called them "The Children." "He waits for you..."

9:38PM: Oh crap! Zombies buried in the snow?! They are attacking Bran, but his wolf saves his life. As Hodor is also being attacked, Bran is able to get inside his head and help him fight. Jojen unfortunately doesn't make it.

9:36PM: Bran and company are in the deep North. They find the heart tree in Bran's vision. What does it mean?

9:35PM: Jon then takes Ygritte beyond The Wall to give her a proper Northern burial. Will Jon ever find love again?

9:31PM: A memorial for those who died on The Wall. Jon locks eyes with the Red Witch, Stannis' mistress. There might be something brewing there.

9:29PM: Khaleesi goes to see her "children"... and chains them to the floor. They are not happy.

9:27PM: In Meereen, Daenerys speaks with a respected tutor who was once a slave, so to speak. He wants to go back to his master and says he's not alone. She really wants them to be free and says she'll make a contract with the old master. Her ideal world isn't working out all that well. Another slave approaches, carrying something. It's the skeleton of a child, burned to a crisp. Oops, the dragons.

9:22PM: Cersei and Jamie have a moment. She kisses Jamie and said she told their father about their incestuous relationship. "I love my brother, my lover." She's determined to have her way.

9:20PM: Back at King's Landing, Cersei and doctors are trying to save The Mountain, who, we remember, was severely wounded by Prince Oberyn (now deceased with his head smashed in). Cersei then stands up to her father Tywin, saying she will not marry Loras Tyrell. She says she'll tell everyone the truth if he makes her. Then she realizes Tywin has no idea that she and Jamie have had relations and that those children are NOT Baratheons.

9:16PM: Jon tells Stannis he is the son of Ned Stark. He also warns Stannis to burn all the dead before night fall.

9:12PM: Horns blow... wait, another army on horses are coming! Who are they? They are killing Wildlings left and right.

9:10PM: Mance knows that his Wildling army is more powerful than the Night's Watch. He tells Jon he also wants to hide behind the wall, just like the rest, because "winter is coming." Mance says if they open the gates, no one else will be killed. Do we trust that?

9:07PM: That didn't take long to find Mance. Jon is no longer the double agent, his loyalty is with the Night's Watch. He tells Mance that Ygritte was killed. Poor Jon, so tortured. They drink to Ygritte, a "proper Northern drink."

9:05PM: Starting with Jon Snow, heading out to negotiate with Wildlings kingpin Mance. Dead giants on the path!

9:03PM: The "GoT" opening theme song has to be one of the best... and we learn something new every time watching that interactive map.

9:00PM: The recap for last week. So much could happen!