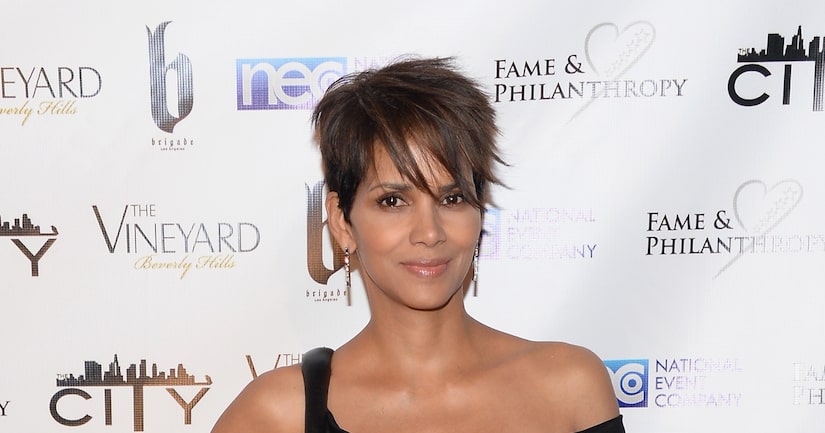 "Extra's" Renee Bargh sat down with Oscar winner Halle Berry to talk about her new role in the drama "Frankie and Alice," and life with husband Olivier Martinez, daughter Nahla, 5, and son Maceo, 5 months.

Berry said, "I just feel great because I have another baby. I never thought that at my stage in life another baby -- and a baby boy -- was coming to me, so yeah, I'm blessed."

The actress, who looks fantastic after having Maceo, said the key to getting her figure back was breastfeeding. "Every mother should breastfeed. It's the quickest way to shed the initial weight and then you have to eat right."

Halle explained how she juggles her career with family as she shoots the new TV series "Extant." "What I’m learning to do, trying to right now, is find the balance… my baby is always with me on set. I bring my daughter after school. I have a nursery there, a playroom for her, so I try to make it as nice as I can for them to spend time with them, see them."

The mom said Nahla enjoys time with her little brother, and she's very serious about her big-sister role. "It's like one of her doll babies came alive. She gets to take care of him, feed him, change his diapers, play with him, dress him up in different clothes like five times a day because she can, so she loves it."

Berry loved watching hubby Martinez on "Revenge." She laughed, "I’m going to follow his little arc along. I'm very proud of him… I think he's delicious."

As for her role in the psychological drama "Frankie and Alice," Berry said, "If someone had told me that we’re going to do a movie about a black woman [with multiple personalities] who has a white racist living inside her, and a little child who’s a genius living inside her, I would have thought that’s just a made-up story, but because it was real, that gave it a gravitas that to me was, 'Wow, this is real, people should know about this.'"

"Frankie and Alice" is in theaters Friday.