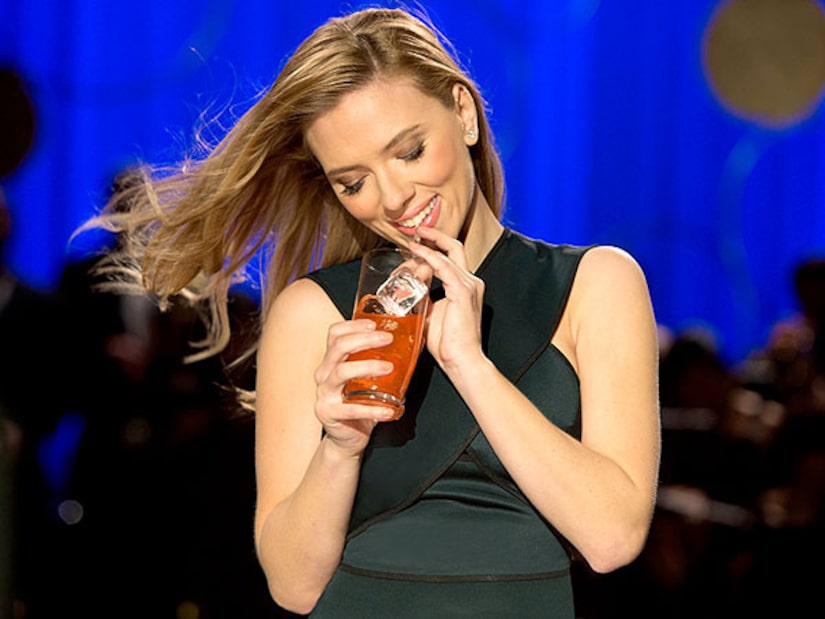 Scarlett Johansson will be seductively sipping a SodaStream drink during the Super Bowl, but the ad had to be modified.

FOX has reportedly rejected the original ad because it ends with Scarlett saying, "Sorry, Coke and Pepsi." The two soft-drink giants are big spenders on Super Bowl ads, and Pepsi also is sponsoring the halftime show.

In an interview with USA TODAY, Daniel Birnbaum, CEO of SodaStream, asked, "What are they afraid of? Which advertiser in America doesn't mention a competitor? This is the kind of stuff that happens in China. I'm disappointed as an American."

Birnbaum said that SodaStream will drop the line because it has little choice. "If I could get my money back, I'd be happy to be out of that deal." Watch the original version!

Meanwhile, the “Her” star is getting flack for being the spokesperson for SodaStream, a company that has drawn criticism for operating a factory in an Israeli settlement in the West Bank.

The actress issued a statement to the Huffington Post, wanting to “clear the air," saying she "never intended on being the face of any social or political movement, distinction, separation or stance as part of [her] affiliation with SodaStream.”

She said, "I remain a supporter of economic cooperation and social interaction between a democratic Israel and Palestine. SodaStream is a company that is not only committed to the environment but to building a bridge to peace between Israel and Palestine, supporting neighbors working alongside each other, receiving equal pay, equal benefits and equal rights. That is what is happening in their Ma'ale Adumim factory every working day.”

Some of the criticism comes from Oxfam International, an organization Johansson is a part of that works to end world poverty.

They stated earlier, "Oxfam respects the independence of our ambassadors. However Oxfam believes that businesses that operate in settlements further the ongoing poverty and denial of rights of the Palestinian communities that we work to support. Oxfam is opposed to all trade from Israeli settlements, which are illegal under international law."

Johansson addressed Oxfam in her statement. "As part of my efforts as an Ambassador for Oxfam, I have witnessed first-hand that progress is made when communities join together and work alongside one another and feel proud of the outcome of that work in the quality of their product and work environment, in the pay they bring home to their families and in the benefits they equally receive."

She continued, “I stand behind the SodaStream product and am proud of the work that I have accomplished at Oxfam as an Ambassador for over 8 years. Even though it is a side effect of representing SodaStream, I am happy that light is being shed on this issue in hopes that a greater number of voices will contribute to the conversation of a peaceful two state solution in the near future."

Johansson also recently spoke with "Extra" about her love of SodaStream... watch here!