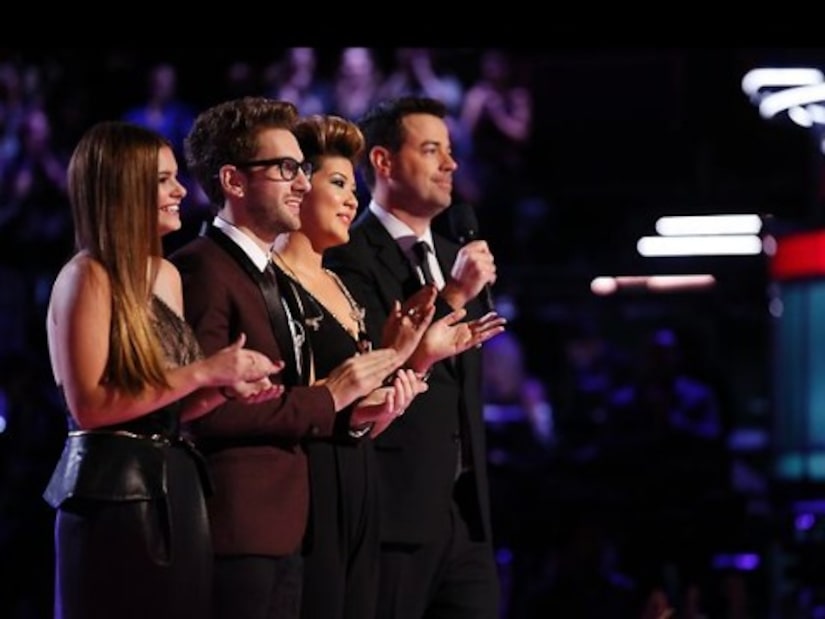 We are live-blogging “The Voice” finale results episode tonight! The show was sure to be a wild ride as superstars like Lady Gaga and Celine Dion took the stage before the show crowned the Season 5 winner.

The top 3 contestants vying for the top spot are Tessanne Chin and Will Champlin from team Adam, and Jacquie Lee from team Christina Aguilera. At this point in the competition, Blake Shelton and CeeLo Green no longer have singers in the race. Click here for our full recap from night one of "The Voice" finale.

Read on to find out who was crowned the winner!

7:55 PM: The winner is Tessanne Chin! The emotional singer attempts to belt her first single, "Tumbling Down," written by One Republic's Ryan Tedder, as her mom and husband join her onstage.

7:43 PM: Lady Gaga is rocking the biggest shoulder pads we've ever seen... singing "Do What You Want." Surprise, it's a duet with Xtina! The superstars, who were supposedly feuding a few years ago, are like BFFs now. Dressed in matching head-to-toe gold, the blondes ended the song with a hug and glass of champagne. Afterward, Christina called Gaga one of the most "down to earth" women she had ever met.

7:21 PM: Celine Dion and Ne-Yo teamed up for their duet "Incredible." While they sounded incredible, we have to say Celine's lingerie-style dress is a little distracting. She's one hot mama!

7:03 PM: Jacquie got a taste of the "real world," teaming up with Hayley Williams and Paramore to sing "Ain't It Fun."

6:25 PM: Tessanne takes the stage with one of her idols... Celine Dion! It's a perfect pairing as they sing Dion's "Love Can Move Mountains."

6:23 PM: In honor of Sexiest Man Alive the show is offering up an Adam Levine montage eating, dancing, doing push ups and getting his make up done. "Backstage he's a beast," Blake says. "Adam can be a bit of a distraction when he walks into a room," Christina jokes.

6:05 PM: The show kicked off with a reunion! Former contestants like Caroline Pennell and James Wolpert joined the top 3 for Outasight's "Tonight is the Night."