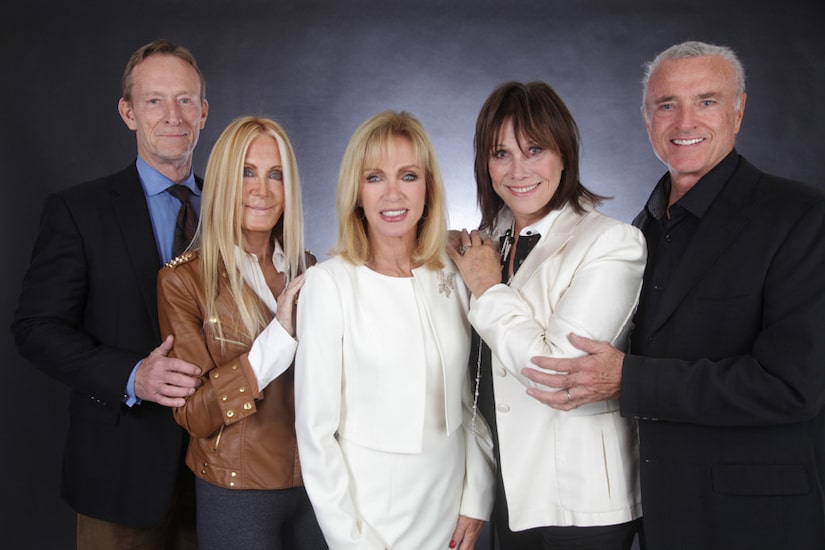 Twenty years after saying goodbye to TV's favorite cul-de-sac, the cast of “Knots Landing” is back for one giant neighborhood reunion.

“When we get together, it's chaotic fun,” said Michele Lee, who played Karen MacKenzie on the hit CBS soap from 1979 to 1993. “We talk on top of each other, beside each other, under each other. We just laugh.”

In between the laughter, there were also smiles and photos with fans, who made the show a network hit throughout its 14 season run. Lee, along with her television husband Kevin Dobson, joined Donna Mills, Ted Shackelford and Joan Van Ark at the fan-centric Hollywood Show in Los Angeles.

Van Ark, who starred as the long-suffering Val Ewing, explained, “It's funny, I have never gone to my own high school reunion. And every time we're back together it's like a high school reunion. We got so close during the time that we filmed. Ted, I've gotten closer and closer and closer to. And I didn't think we could get any closer. We have lunch together every three or four weeks.”

With the success of the new “Dallas” on TNT, any chance “Knots Landing” could pick up where it left off after 344 episodes?

Dobson lamented, “Not a prayer. And it's not because of us. It's because there's some kind of legal BS involved.” Dobson added it comes down to who owns the rights to the “Knots” characters.

Donna Mills added “Dallas” producers tried to get her scheming, oft-married Abby Fairgate Cunningham Ewing Sumner to appear on the hit show. With Larry Hagman's passing, would she have been Southfork's new resident villain? “They had been talking about me doing it even before Larry passed away,” said Mills.

For now, it seems only Gary and Val Ewing can appear on “Dallas” since that is where those characters originated. If “Dallas” can't bring Abby back then Van Ark has another idea to get all her “Knots”-mates together.

“It would be delicious and glorious to have a reunion film. Abby would be a bag lady now,” Van Ark joked. “Valene would be running a studio like Sherry Lansing. Who knows where Gary is? Maybe in the gutter with Abby!”