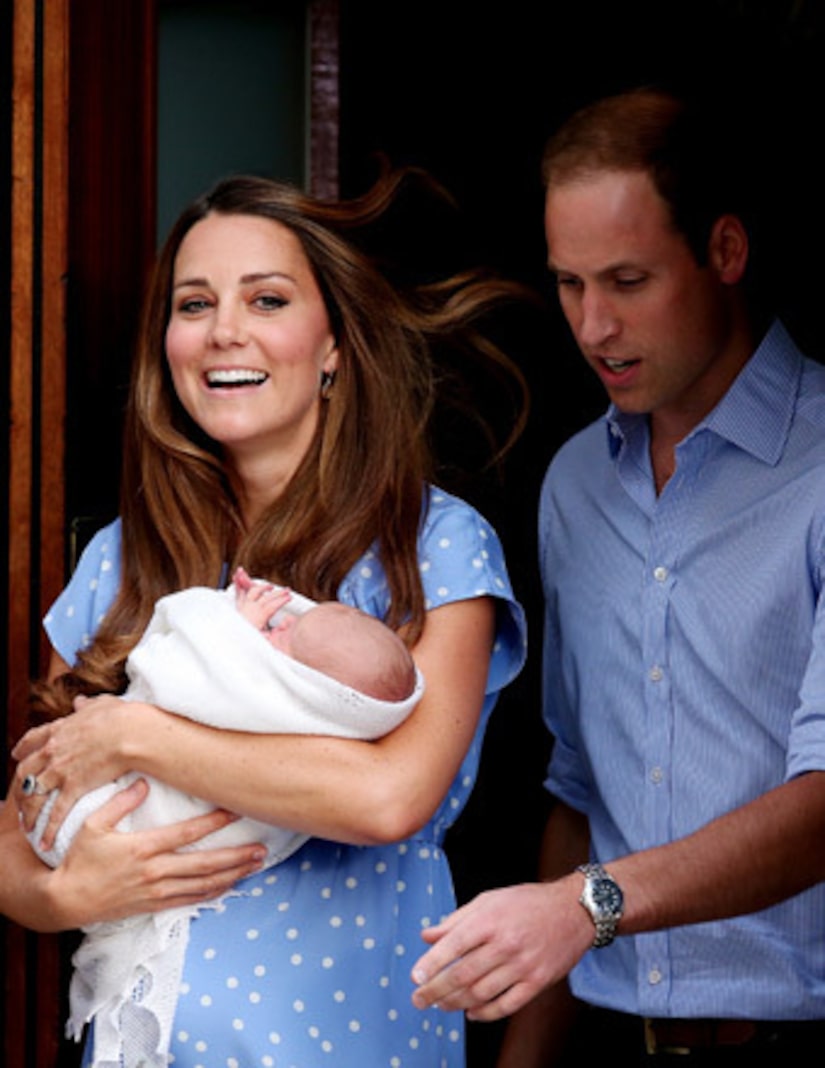 Kate Middleton and Prince William shared their royal bundle of joy with the world on Tuesday, when they introduced their celebrated baby on the steps of St. Mary's Hospital. Check out the pic and scroll down for the video!

Kate glowed in a blue polka dot dress as the couple emerged from St. Mary's Hospital and answered questions from the press. William called it a "very emotional time" while Kate said any family would know what it feels like to welcome a new baby. “He's got her looks, thankfully,” William joked, and when asked if his son has hair, he said, “He's got way more than me, thank God.”

Afterward, the couple went back inside to get the car seat, before jumping in the car and heading to Kensington Palace. New dad William was behind the wheel.

The couple said they are still working on a name, but conjecture about the baby's moniker continued on Tuesday.

Could it be George, Phillip, James or even Chesterfield? Those are just a few possibilities floating around for the royal tot. It could take some time; the public waited a week to learn Prince William's name and a month to learn Prince Charles'.

Some of the first people to meet the baby were the new grandparents. Carole and Michael Middleton stopped by the hospital on Tuesday to meet the newest addition to the family, followed by Prince Charles and wife Camilla, Duchess of Cornwall.

As they left, Carole told the press, "He's absolutely beautiful. We are so thrilled. They are both doing really well."

Charles hinted at the baby's debut, telling the press, "You have had a long wait," adding later, you'll see in a minute.”

Although the Middletons were not present for the birth (Kate reportedly only wanted Prince William by her side), Carole is expected to play a key role in coming months.

The National Post says Kate doesn't want to hire a full-time caregiver, she would rather have Carole act as nanny to the Prince of Cambridge.

Kate and Wills “could not be happier” about the baby. William even spent the night in the hospital with his wife and newborn.

They may have celebrated over hot pizza… a driver was seen dropping off a pie at the Lindo wing on Monday night.