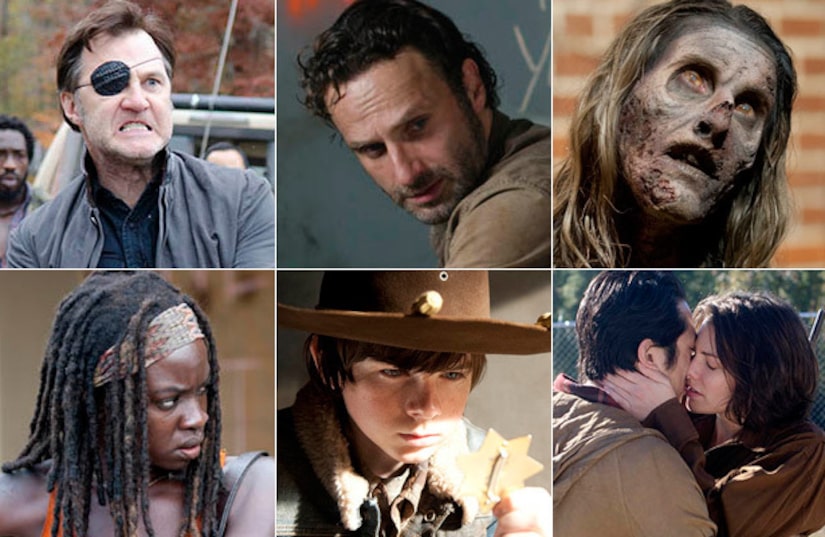 “The Walking Dead” Season 3 finale left fans in shock with the Governor still on the loose and Rick welcoming the Woodbury survivors into the prison… not to mention Andrea's suicide!

In the aftermath of the dramatic ending, the fall premiere won't come soon enough. Looking ahead, here are our burning questions for Season 4.

Where is the Governor?
The ruthless Woodbury leader took off with two henchman after gunning down his own people. Why won't this guy die already?

Is it too late for Carl?
Life in zombie land has turned Carl from an innocent child to a merciless killer. After gunning down another boy in the finale, will he ever regain his humanity?

When is the wedding?
Glen stole an engagement ring from a zombie and proposed to Maggie, but will the post-apocalyptic lovebirds get a real wedding or would that be too uplifting?

Is Rick still living in “Crazy Town”… at least part-time?
Rick took a trip to “Crazy Town” in Season 3, but a scene from the finale indicated he's no longer seeing visions of his late wife, Lori. Did he finally come to his senses?

Will Michonne stay?
Life at the prison was hit or miss for loner Michonne, especially after Rick nearly turned her over to the Governor as a bargaining tactic. Now that Andrea is gone, will she stick around?