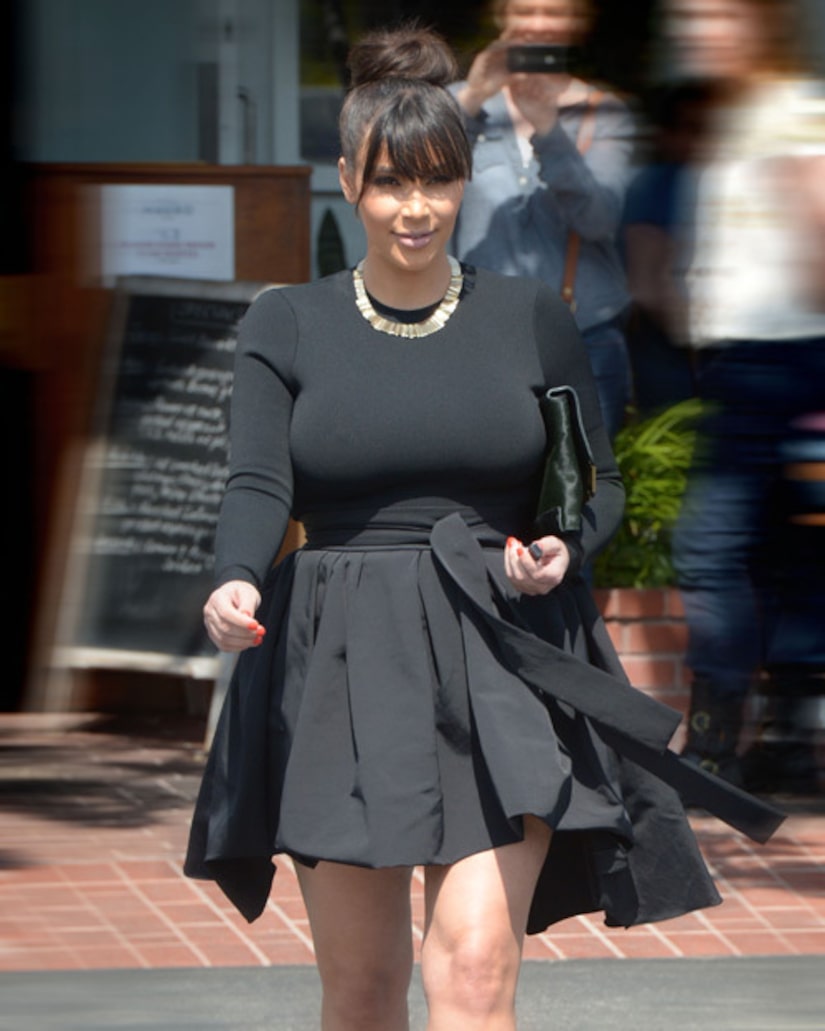 “Extra’s” Maria Menounos caught up with pregnant Kim Kardashian at the junket for her new film “Temptation,” where they talked about potential baby names, the weight gain rumors, her cravings and her role in the Tyler Perry drama.

The Internet was buzzing last week over whether Kim and boyfriend Kayne West would name their baby North or stick with a K name, like many of the Kardashians.

Kim explained, “I think it would be really cute cause Kanye and I are both K’s… but half the names on our list aren't K’s… we still have time, whatever feels right… Kanye being the father wants something that’s unique.”

She also addressed those weight gain rumors and tabloid magazine covers. “There are maybe two or three covers just this week that say I am 200 pounds. I'm like, ‘You are 60 pounds off here’… It wouldn't even bother me if I gained all the weight. And I have the biggest sweet tooth and I love junk food. Being pregnant I don't like any of it.”

The reality star said she is eating a lot of carrots and celery with ranch and wishes she wanted to indulge more, saying, “I'm waiting for the moments when someone's like let's go to McDonald's and Taco Bell -- that's not happening for me and I'm kind of sad about it.”

Kardashian revealed that the pregnancy hasn’t always been easy, but now she’s really enjoying it. “I'm not going to lie and be like, ‘Oh, it's been amazing and I've adjusted great,’” she said. “At the beginning it was tough for me when your body changes so much… but once you kind of grasp that and embrace it... it's amazing.”

How does she handle such a busy schedule? Kim said, “I kind of split up my days. I'll do half a day of work and then I'll do half day of really just resting and taking care of myself, but I haven't been tired at all.”

Kim shot “Temptation” just after her split form Kris Humphries and said it was a welcome distraction, “And kind of ironic. I'm playing a wedding counselor.” Kim said. “For my first big film I wanted to do something that was not exactly not who I am in real life, but close enough to where it wouldn't be too much of a stretch for me.”