First Lady Michelle Obama made her own whirlwind campaign swing through Los Angeles on Thursday, with high profile stops at “Jimmy Kimmel Live,” Will and Jada Smith's house and a birthday lunch for Katy Perry!

Much of Michelle's interview with Jimmy was surrounding President Obama and the upcoming election, including a skit where she wakes Kimmel up on Election Day with a bullhorn.

Mrs. Obama also opened up about raising two daughters, admitting that the President has asked one thing of the girls this election: Try not to look bored.

“That was the instruction before he gave his speech at the DNC,” she told Jimmy of Sasha and Malia. “We're backstage and they're playing around and they're laughing and they're giggling and he said, 'Just act like you're listening to me!'”

Michelle also stopped by Will Smith and wife Jada's home in Calabasas for a sold-out fundraiser co-hosted by Salma Hayek and others. Tinseltown fundraisers have been a big part of the campaign. The Hollywood Reporter estimates the couple raised about $13 million over the past four weeks (including the Smith's party).

Despite her busy schedule, Obama managed to squeeze in a birthday lunch party for Katy Perry. The singer had just performed for the President at a rally in Las Vegas late Wednesday night. 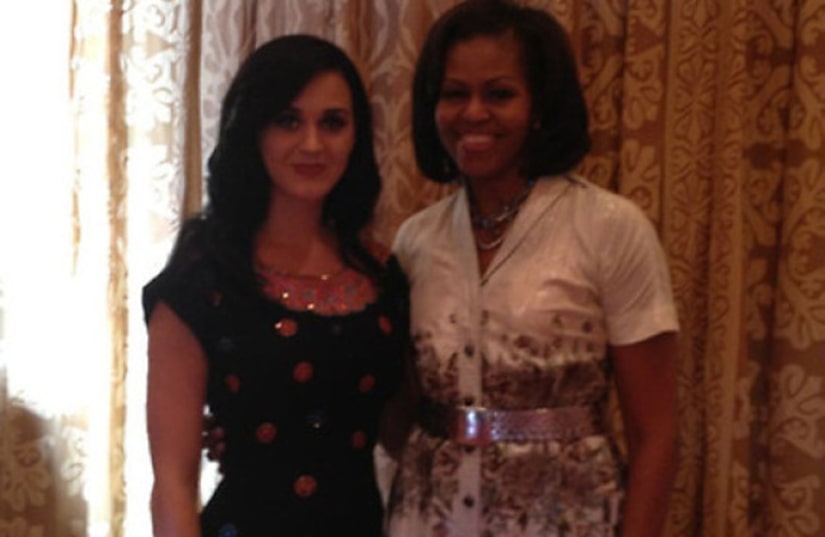 At first she tweeted, “So tonight was a great night! The PRESIDENT gave grandma and I unforgettable shout outs & now I am officially 28! Best. birthday. ever.”

In reality it wasn't truly “complete” until after lunching with Michelle, “NOW my bday is complete! Lunch with @MichelleObama.”