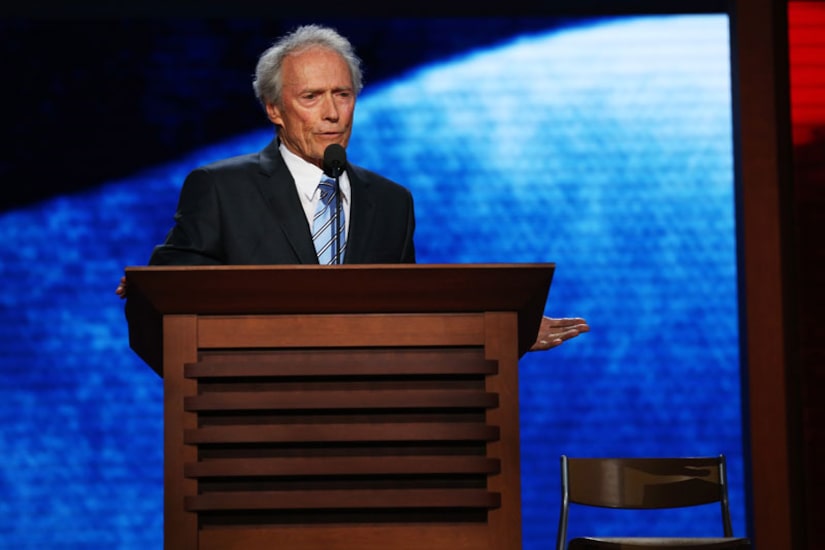 “Extra’s” Jerry Penacoli sat down with actor/director Clint Eastwood to talk about his now infamous speech at the Republican National Convention, thoughts on the 2012 Presidential campaign, his new film "Trouble with the Curve" and bringing back "Dirty Harry."

In one of the most memorable moments of the RNC, Clint Eastwood’s speech definitely left an impression. Eastwood told Penacoli, “People loved it or hated it, and that’s fine. I figure if somebody’s dumb enough to ask me to go to a political convention and say something, they’re gonna have to take what they get.”

Penacoli asked if he would do it again, and Clint responded, “I never look backward. It’s done and it’s done. I probably would, I wouldn’t be afraid of it.” The 82-year-old added that he was inspired by acting and comedy legends with the chair act.
“Actually, I did a funeral speech for a friend of mine and I started talking to mythical people imitating him and I sorta stole that for myself," he said. "But it reminds me of the days of Shelly Berman… Bob Newhart, all those guys who used to do those phone conversations, all that sort of stuff.”

Eastwood is supporting Mitt Romney for President with the hope that he will bring more business savvy to the White House. Regardless of the party in office, he wants to see "less time on TV, more time in office."
“I would like to see some real people working," he said. "Comes a point when you gotta stop the rhetoric, stop the teleprompters, people reading speeches somebody else probably wrote. Goes for all of them. Unless they can do it really well, like Ronald Regan or Bill Clinton did.”

No one does it better than Eastwood on the big screen. Penacoli had to cry foul when Clint once told him that "Gran Torino" was going to be his last movie. Now, he’s back in the new film, “Trouble with the Curve.”

Clint laughed, “I’ve modified it a bit, it’s the last one I do as an actor and director. You never know. I just kind of figured at a certain age there’s not that many good roles around but every once in a while somebody writes one that is interesting.”

Clint, however, is not eager to reprise his most famous role. “Dirty Harry was a long time ago. But certain things are done at a certain time in your life and worked and no reason to tamper with them." Although, he does have an idea where Harry might be these days. The director joked, “Fly fishing out in the woods or something, with a .44 Magnum.”

“Trouble with the Curve” swings into theaters September 21.