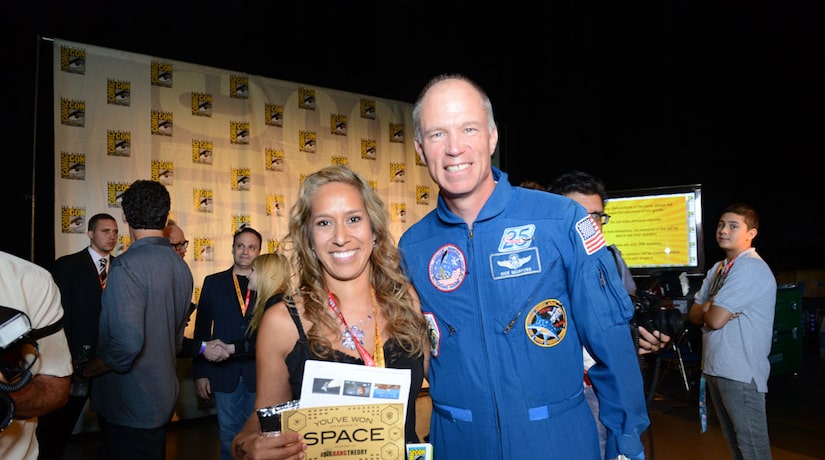 In the Season 5 finale of  “The Big Bang Theory,” Caltech engineer Howard Wolowitz (played by Simon Helberg) is launched into space aboard a Russian Soyuz space capsule.

During the panel session, Helberg was asked whether he would ever entertain a visit to space. That’s when XCOR Chief Test Pilot/former NASA Astronaut Richard Searfoss made a surprise appearance on stage and offered the very real opportunity to actually take a trip outside the earth’s atmosphere on their suborbital spacecraft. Co-creator/executive producer Chuck Lorre suggested it be given to one of the show’s fans in attendance. The lucky fan holding the golden ticket was Becerra, who lives in Paso Robles, Calif.

“The fifth season finale episode of ‘The Big Bang Theory’ proved to be an unexpectedly emotional experience for all of us working on the show. The idea that one man’s journey into space had the power to bond his friends together was somehow deeply touching,” said Lorre. “And now, everyone -- cast, crew and the millions of fans of the show -- can gather together and experience that same wonderful bond when we watch one lucky fan take an actual trip into space, courtesy of XCOR. We are so proud and grateful to be part of this adventure: ‘The Big Bang Theory,’ boldly going where no sitcom has gone before!”

“We couldn’t be more excited to be working with Warner Bros. Television and ‘The Big Bang Theory’ to give this amazing opportunity to one of the show’s biggest fans,” said Andrew Nelson, Chief Operating Officer, XCOR. “At XCOR, we’re all about dreaming big and making the seemingly impossible a reality, and it’s so gratifying to work with partners with similar vision. As fans of The Big Bang Theory ourselves, how could we not say ‘yes’ when we got the call?”