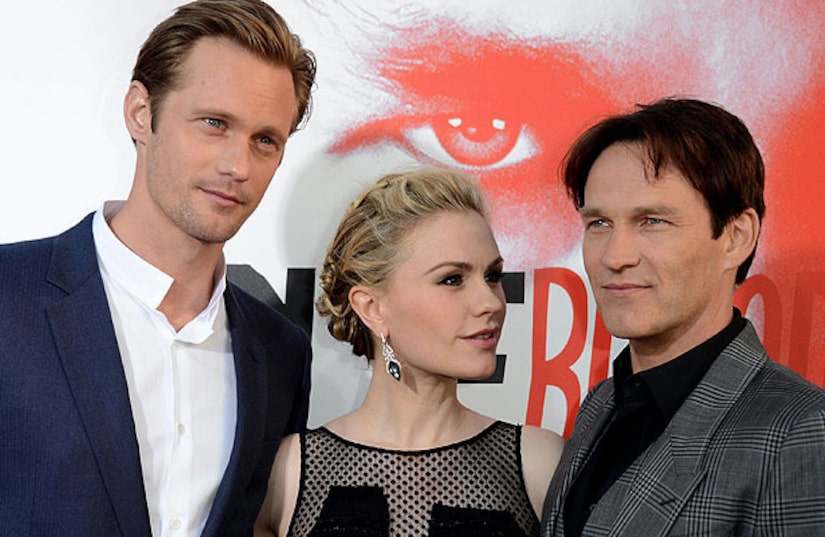 “Extra’s” Renee Bargh caught up will all the stars of the HBO series “True Blood” at the Season 5 premiere – and we just had to get the inside scoop on what’s going to happen when the series premieres June 10!

Now that Sookie (Anna Paquin) has sworn off vampires Bill (Stephen Moyer) and Eric (Alexander Skarsgard), will she find comfort in the arms of werewolf Alcide?

Joe Manganiello, who plays the hunky wolf, told Renee, “According to the trailers, there may or may not be a romance brewing between Alcide and Sookie.”

Is Tara really dead? The actress who plays her, Rutina Wesley, revealed, “She's coming back! And how she comes back is going to be very, very, very interesting.”

How about Bill and Eric, are they now friends? Skarsgard cryptically offered, “We don't know yet.  We don't know where we're going to end up.”

OK, we get it… but please tell us there will be more nudity. Sam Trammell, who plays cutie shape shifter Sam Merlotte, said, “I have my clothes off a lot this year,” while Ryan Kwanten, aka Jason Stackhouse, replied, “Not from me, thank God.” Too bad.

Moyer added, “I think that every time we see what the new script is, we're expecting to see some naked mud wrestling, but you'll have to wait and see.”

“True Blood” fans are also excited about Moyer and Paquin’s real-life romance, especially now that Anna is expecting the couple’s first child.  Stephen said, “It's amazing, but we've still got another month of work to go yet!” How are they working around the baby bump? Paquin replied, “Clever camera angles.”

Watch Season 5 of “True Blood” when it premieres June 10 on HBO!