Yes, they are going there. The National Enquirer and The Globe are reportedly set to publish a photo of Whitney Houston in an open coffin, sparking outrage among fans. 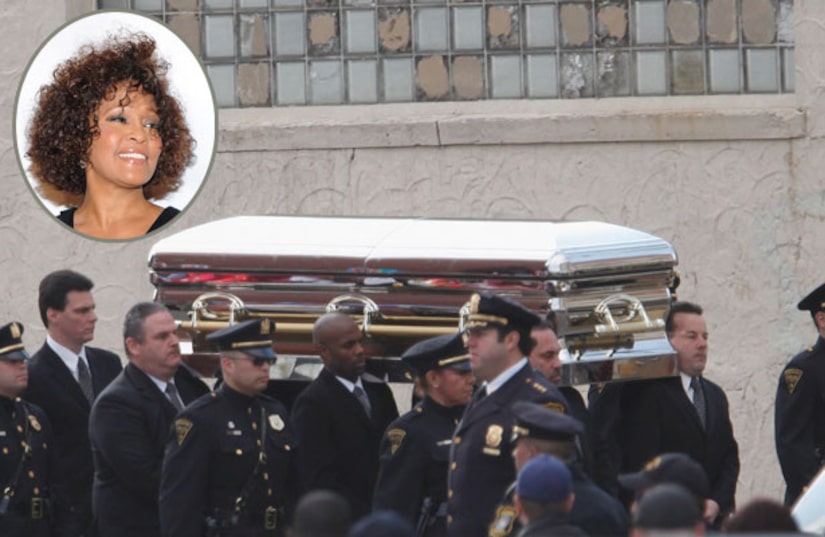 The Enquirer claims the photo was taken Friday at the private wake at Whigham Funeral Home in Newark, reports The Daily Mail.

The picture shows Houston wearing a regal purple dress and what looks like a diamond broach and gold slippers.

The Enquirer published a post-mortem photo of John Lennon on their cover in 1980, and one of Elvis in his coffin in 1977.

The singer's funeral took place on Saturday and was attended by stars including Mariah Carey, Oprah Winfrey and her co-star from "The Bodyguard," Kevin Costner.

Whitney's on-again, off-again boyfriend Ray J was also in attendance and has reportedly been struggling with the loss.

One radio station in Chicago, however, decided to joke about his emotional state on Tuesday, airing a fake interview with the singer/author, in which he breaks down on air.

Some web outlets took the interview to be real and reported Ray J had a "nervous breakdown."

The person behind the spoof, a comedian named Leon Rogers, tweeted, "LISTEN TO ALL OF YOU NIMRODS THAT REALLY THOUGHT THAT WAS RAY J SHAME ON YOU IT WAS A JOKE!"

Ray J is said to be upset over the radio stunt and may be considering legal action.

Whitney was once romantically linked to actor/comedian Eddie Murphy in the '80s. Houston dated Murphy before marrying Bobby Brown.

Former football quarterback Randall Cunningham shared a two-year relationship with Houston, before calling it quits in 1987.

It was rumored that Houston once dated the Jackson 5 star, Jermaine Jackson.

In 1989, Whitney met Bobby Brown at a music awards show, and they married in 1992. Daughter Bobbi Kristina was born a year later.Bobby and Whitney famously had a tumultuous 15-year relationship. They once appeared on their own reality show, in which many of their marital problems were brought to light.Brown was accused of domestic violence in 1993 after Houston claimed he slapped her during a jealous argument.The two divorced in 2007.

Whitney's most recent romantic partner was 31-year-old rapper Ray J -- who was infamously linked to Kim Kardashian in their 2003 sex tape. Ray J is also singer Brandy's younger brother.The two dated on-and-off for four years, after Houston divorced Bobby in 2007.Whitney and Ray J were spotted together weeks before Houston's death, which sparked rumors of a reconciliation.The rapper stopped by "Extra" at The Grove one day before Houston's death, and addressed whether their relationship was back on.video platform [https://corp.kaltura.com][https://cdnbakmi.kaltura.com/p/594231/sp/59423100/thumbnail/entry_id/0_rtrj3uzi/width/120/height/90/bgcolor/000000/type/2]