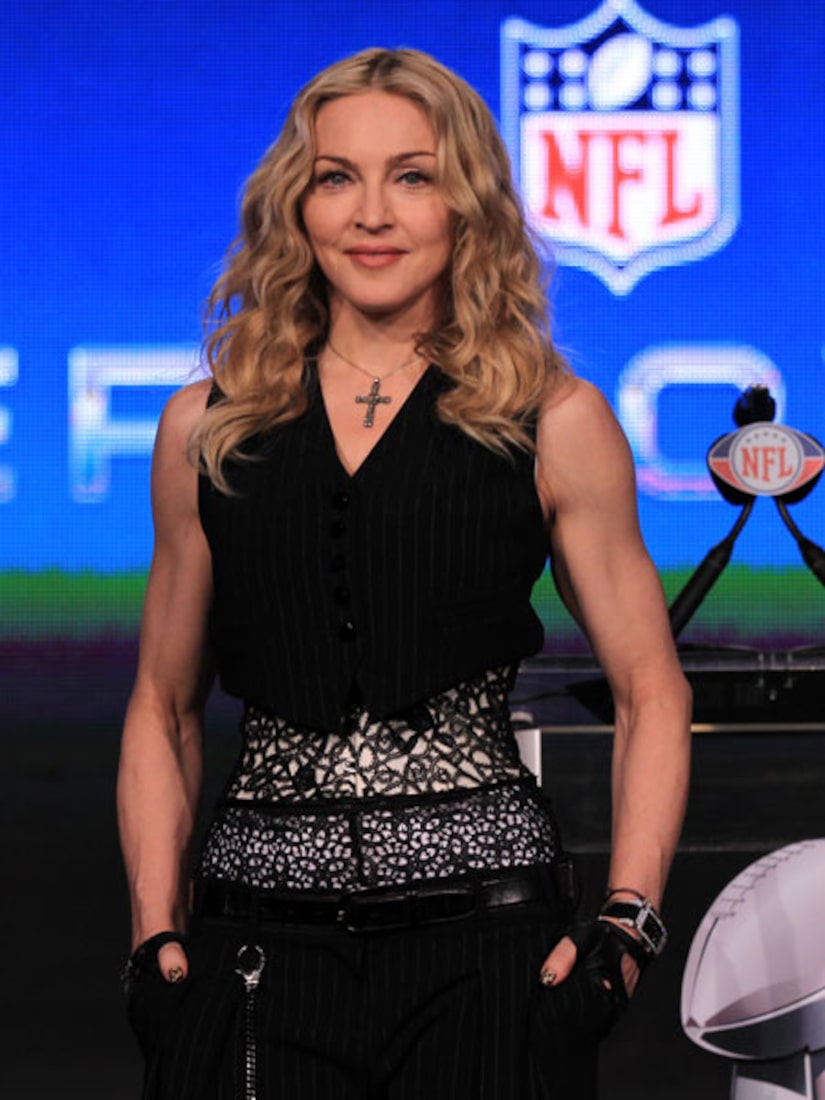 Madge, who today released a new video, "Give Me All Your Luvin'," pointed out, "It's like the Super Bowl is like, God in America. It's like the whole country is watching this game. It's everything and it means so much to people. Then I come on at halftime... I'd better put on a damn good show, right?"

When AJ inquired, "What are you gonna do?" the singer managed to say she will perform a combination of tunes from the past and present. "I'm gonna do a new song from my record, then do some oldies but goodies, so stay tuned." Nicki Minaj and M.I.A. are also set to perform with Madge.

The busy songstress just added "movie director" to her list of accomplishments, with her romantic drama, "W.E," about the affair between King Edward VIII and American divorcee Wallis Simpson. Madonna said she related to the story, and revealed, "I think I've made sacrifices for love, and I think that's essential. I think that's what you do. But I'd like to believe I can have it all."

Tom Petty performed during the 2008 Super Bowl at the University of Phoenix Stadium in Glendale, Arizona.

Diana Ross got whisked away in a helicopter during her song, "Take Me Higher" at the Sun Devil Stadium in Tempe, Arizona.

The Boss rocked the Super Bowl show at the Raymond James Stadium in Tampa, Floria.

Prince performed in a rain-soaked halftime show at the Dolphin Stadium in Miami Gardens, Florida. The rain was not purple.

In a scorching pyrotechnics-filled show, Paul McCartney sang to the Super Bowl crowd at Alltel Stadium in Jacksonville, Florida.

The Who lit up the laser beamed stage at the Sun Life Stadium in Miami Gardens, Florida.

In an emotional tribute to the 9-11 victims, humanitarian super group U2 sang at the Superdome in New Orleans, Louisiana.

Perhaps the most memorable and shocking halftime show comes from Janet Jackson's 'Rock Your Body' performance with Justin Timberlake. Thanks to Ms. Jackson's wardrobe malfunction, future telecasts are delayed five seconds. The 2004 Super Bowl was held at the Reliant Stadium in Houston, Texas.

In 1993, the NFL decided to beef up it's halftime show in order to keep viewers tuned in. They decided to go straight to the top and have the King of Pop wow football fans everywhere.Michael Jackson was surrounded by 3,500 children during his unforgettable "Heal the World" performance at Pasadena's Rose Bowl.