Ashton Kutcher tweeted this photo, trying to use some humor to deflect the backlash after he tweeted about Joe Paterno's firing without being aware of the abuse scandal. 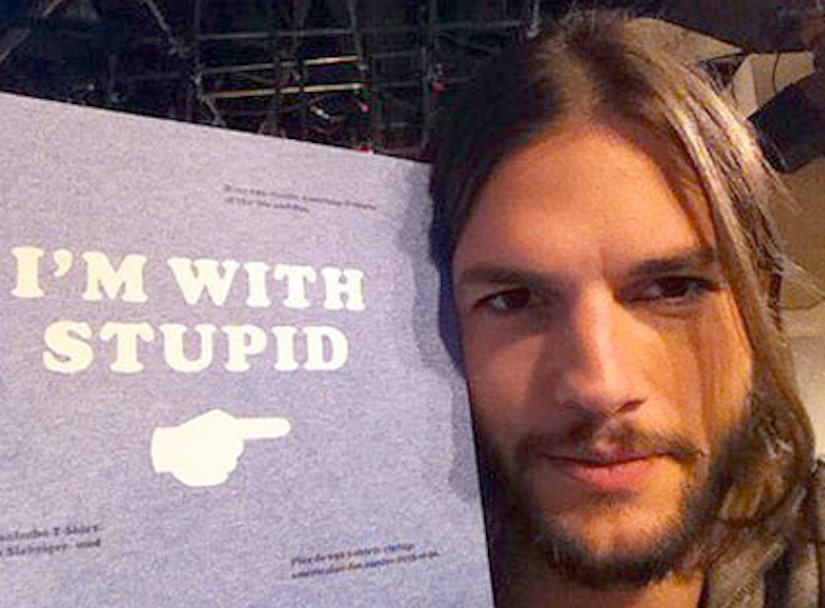 The "Two and a Half Men" star, who has over 8 million Twitter followers, was bombarded with angry tweets after he wrote, "How do you fire Jo Pa? I find it in poor taste." Before sending out the Tweet, Kutcher did not realize the Penn State coach was axed after doing nothing about assistant coach Jerry Sandusky's alleged sexual abuse of young boys.

Kutcher wrote, "What's a picture worth?" along with a link to the photo on Chime.in that had a sign, "I'm with stupid," next to his face. Ashton, 33, apologized after the mistake, expressing his sincere regret over the tweet, given the fact that he and wife Demi Moore actively support their anti-sex-trafficking organization, DNA.

It appears as though many of his followers have forgiven the major faux pas, saying things like, "You're still human, you corrected it. That's commendable. Stay strong," and "You made a mistake, and then you did the right thing by apologizing for it. Good for you."

On Thursday, Kutcher said he's turning over management of his Twitter to his media team "to ensure the quality."