Actress Kristen Stewart was spotted arriving to LAX wearing a hand cast, which may answer the rumor that she injured herself on the set of her new film, "Snow White and the Huntsman." 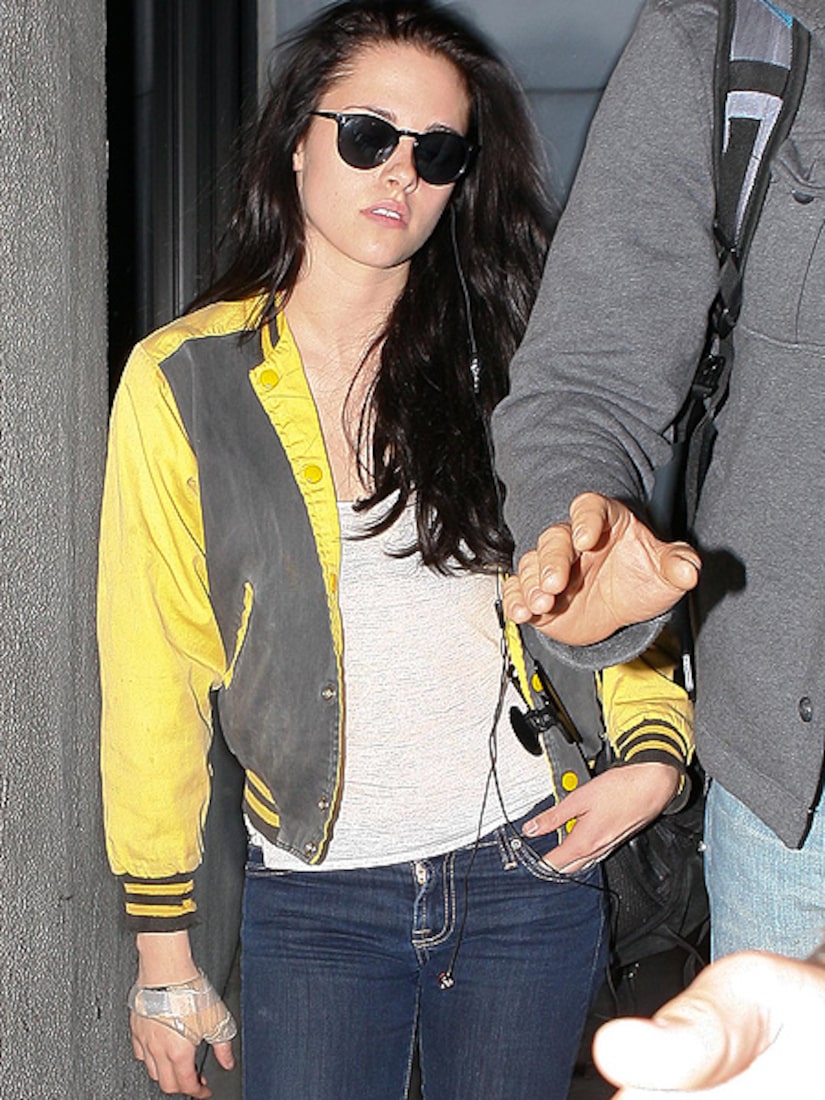 It's been over two weeks now since one of K.Stew's "White" co-stars tweeted about the injury, saying it was "nothing scary." Still no confirmation on exactly what happened.

Stewart is gearing up for "The Twilight Saga: Breaking Dawn, Part 1" media onslaught, as she and her co-stars Robert Pattinson and Taylor Lautner begin the promotion for the highly anticipated film, which opens in theaters November 18.

Check out some of the best "Twilight" movie quotes from the past three films!

"I'd never given much though to how I would die. But dying in place of someone I love, seems like a good way to go. I can't bring myself to regret the decisions that brought me face to face with death. They also brought me to Edward." —Bella (Kristen Stewart)

Bella: "Are you going to tell me how you stopped the van?"Edward (Robert Pattinson): "Yeah. Um... I had an adrenaline rush. It's very common. You can Google it."

Bella: "Will you tell me the truth?"Edward: "No, probably not. [Bella turns away slightly angry] I'd rather hear your theories."Bella: "I have considered radioactive spiders and kryptonite."Edward: "All superhero stuff right? But what if I'm not the hero? What if I am the bad guy?"Bella: "You're not."

Bella: "You're impossibly fast. And strong. Your skin is... pale white, and ice cold. Your eyes change color... and sometimes you speak like-like you're from a different time. You never eat or drink anything; you don't go into the sunlight. [pauses] How old are you?"Edward: "Seventeen."Bella: "How long have you been 17?"Edward: "...a while."Bella: "I know what you are."Edward: "Say it... out loud. Say it."Bella: "Vampire."Edward: "Are you afraid?"Isabella Swan: [turns to face him] "No."Edward: "Then ask me the most basic question: What do we eat?"

Edward: "And so the lion fell in love with the lamb."Bella: "What a stupid lamb."Edward: "What a sick, masochistic lion."

"About three things I was absolutely positive. First, Edward was a vampire. Second, there was a part of him, and I didn't know how dominate that part might be, that thirsted for my blood. And third, I was unconditionally and irrevocably in love with him." —Bella

Waylon Ned Bellamy): "Well hello."James (Cam Gigandet): "Nice jacket."Waylon: "Who are you?"James: "Always the same inane questions... 'Who are you?'"Victoria (Rachelle Lefevre): "'What do you want?'"James: "'Why are you doing this?'"Laurent (Edi Gathegi): "James... let's not play with our food."

Esme Cullen (Elizabeth Reaser): "I hope you're hungry."Bella: "Yeah, absolutely!"Edward: "She already ate."Rosalie Hale (Nikki Reed): [crushes the salad bowl she's holding] "Perfect!"Bella: "Yeah. It's just that I know... I know you guys don't eat."Esme: "Of course. That's very considerate of you."Edward: "Just ignore Rosalie. I do."Rosalie: "Yeah! Let's just keep pretending like this isn't dangerous for all of us."Bella: "I would never tell anybody anything."Dr. Carlisle Cullen (Peter Facinelli): "She knows that."Emmett Cullen (Kellan Lutz): "Yeah, well the problem is... you two have gone public now so..."Esme: "Emmett!"Rosalie: "No, she should know. The entire family will be implicated if this ends badly."Bella: "Badly as in... I become the meal."

"You are my life now." —Edward

"Please don't make me choose. Because it will be him, every time. It's always been him." —Bella

"It's my birthday, can I ask for something? Kiss me." —Bella

Bella: "I'm coming with you!"Edward: "Bella, I don't want you to come with me."Bella: "You... You don't want me?"Edward: "No."Bella: "Well, that changes things. A lot. What happened with Jasper was nothing."Edward: "Nothing compared to what could've happened. I promise never to put you through anything like this ever again. This is the last time you'll ever see me."

"Alice. You've disappeared. Like everything else. Now who else can I talk to? I'm lost. When you left, and he left, you took everything with you. But the absence of him is everywhere I look. It's like a huge hole has been punched through my chest. But In a way, I'm glad. The pain is the only reminder that he was real. That you all were." —Bella

Jacob: "Tell me something... You like me, right? [Bella nods] And you think I'm sorta beautiful?"Bella: "Jake, please don't do this."Jacob: "Why?"Bella: "Because you're about to ruin everything. And I need you."Jacob: "Well, I've got loads of time. I'm not going to give up."Bella: "I don't want you to. But that's just because I don't want you to go anywhere. It's really selfish. You know, I'm not like a car that you can fix up. I'm never going to run right."Jacob: "It's because of him, isn't it? Look, I know what he did to you. But Bella, I would never, ever do that. I won't ever hurt you. I promise. I won't let you down. You can count on me."

Jared (Bronson Pelletier): "These are trade secrets! She runs with vampires!"Bella: "You can't really run with vampires. They're very fast."Jared: "Well, we're faster. Freaked out yet?"Bella: "You're not the first monsters I've met."Sam Uley (Chaske Spencer): "Jake's right, you're good with weird."

Alice Cullen (Ashley Greene): "Bella it's Edward, he thinks you're dead!"Bella: "What?"Alice: "He's going to the Volturi. He wants to die, too."

Edward: "Heaven."Bella: [Bella runs into Edward in attempt to get in back in the shadows] "You have to move! Open your eyes, look at me. I'm alive. You have to move!"[Edward grabs Bella and goes into the shadows]Edward: "You're here!"Bella: "I'm here."Edward: "You're alive!"Bella: "Yes... I needed you to see me once. You had to know that I was alive. You didn't need to feel guilty about it. I can let you go now."Edward: "I could never let go of you. I just couldn't live in a world where you didn't exist."Bella: "[puzzled] But you said... "Edward: "I lied. I had to lie, and you believed me so easily."Bella: "Because it doesn't make sense for you to love me. I'm nothing... Human. Nothing."Edward: "Bella, you're everything to me. Everything."

Edward: "The Volturi are the closest thing my world has to royalty... they enforce the law."Bella: "Vampires have laws?"

Aro (Michael Sheen): "What a happy surprise! So Bella is alive after all. Isn't that wonderful? I love a happy ending... they are so rare."

Edward: "I just have one condition if you want me to do it myself."Bella: "What's the condition?"Edward: "And then forever."Bella: "That's what I'm asking."Edward: [dramatic pause] "Marry me, Bella."

"When we were 5, they asked us what we wanted to be when we grew up. Our answers were things like, astronauts, president... or in my case, a princess. When we were ten, they asked again. We answered, a rock star, cowboy, or in my case, a gold medalist. But now that we're grown up, they want a serious answer. Well, how about this. Who the hell knows? This isn't the time to make hard and fast decisions; this is a time to make mistakes. Take the wrong train and get stuck somewhere. Fall in love... a lot. Major in philosophy, because there's no way to make a career out of that. Change your mind, and change it again, because nothing's permanent. So, make as many mistakes as you can. That way, someday, when they ask what we want to be, we won't have to guess... we'll know." —Jessica

Charlie Swan (Billy Burke): "What's going on?"Jacob: "I kissed Bella. [pause] And she broke her hand punching my face. It was a complete misunderstanding."

Bella: [about her kissing Jacob] "You saw?"Edward: "No. But Jacob's thoughts are pretty loud."Bella: "I don't know what happened."Edward: "You love him."Bella: "I love you more."Edward: "I know."

Edward: [about Jacob] "Doesn't he own a shirt?"

Jasper Hale (Jackson Rathbone): "The two most important things to remember are first, never let them get their arms around you, they'll crush you instantly. And second, never go for the obvious kill. They'll be expecting that. And you will lose."

Bree (Jodelle Ferland): "What did you do to me? I, I'm so...[clutches throat]Riley (Xavier Samuel): "I know. We'll get you someone to drink. Just try not to get killed. I'm gonna need numbers."

Jacob: "Imprinting on someone is like... Like when you see her... Everything changes. All of a sudden, its not gravity holding you to the planet. It's her... Nothing else matters."

Edward: [with Jake in the tent,as Bella sleeps between them] "This might sound odd, but I'm glad you're here."Jacob: "Meaning, as much as I'd love to kill you, I'm glad she's warm. Let's face it, I am hotter than you."Edward: "If we weren't natural enemies, and you weren't trying to steal my reason for existing, I might actually like you."Jacob: "Well, if you weren't planning on sucking the life out of the girl I love, I might... [laughs] No. Not even then."

Charlie Swan: "Well, his sister I like."Bella: "Alice? Yeah, she's great. Hey Dad, I was wondering, why didn't you get re-married, after mom?"Charlie Swan: "Uh, I don't know... uh I guess I haven't met the right gal. Why?"Bella: "I don't know. I thought you just maybe gave up on the whole institution of it, of marriage... But do you think there's any value in it?"Charlie Swan: "Yep. Yeah, marriage has value... when you're older, much older. Like your mother, uh, seemed to work out fine for her the second time around, later in life."Bella: "Yeah I guess."Charlie Swan: "I mean, you definitely don't want to have to get married cause your not... um careful."Bella: "What?"Charlie Swan: "You know what I'm talking about. There's... things that you need to think about if your going to be... physically intimate..."Bella: "Okay, don't have 'the talk,' please."Charlie Swan: "It's just as embarrassing for me as it is for you."Bella: "I doubt that. And don't bother, cause Mom bet you to it like 10 years ago."Charlie Swan: "Well, you didn't have a boyfriend 10 years ago."Bella: "I'm sure things work the same way."Charlie Swan: "Alright, so, you guys are taking precaution?"Bella: "Dad, please just don't worry about... that. Edward is... old school."Charlie Swan: "Old school, great. What's that, like a code for something?Bella: "Oh my God, dad, I'm a virgin!"Charlie Swan: "Ah, okay... glad we covered that."Bella Swan: [runs up stairs] "Me too!"Charlie Swan: "Virgin... I'm liking Edward a little more now."

Edward: "I'm from a different era, things were a lot less complicated. And if I'd met you back then, I would've courted you, would've taken you on chaperoned strolls, ice tea on the porch. I may have stolen a kiss or two, but only after asking your father's permission — and I would've got down on knee. [kneels] And I would've presented you with a ring. [opens box with the ring and places it in her hand] This is my mother's. Isabella Swan, I promise to love you every moment of forever. Would you do me the extraordinary honor of marrying me?"Bella: "Yes."

Bella: "This wasn't a choice between you and Jacob. It was between who I should be and who I am. I've always felt out of step. Like literally stumbling through my life. I've never felt normal, because I'm not normal, and I don't wanna be. I've had to face death and loss and pain in your world, but I've also never felt stronger, like more real, more myself, because it's my world too. It's where I belong."Edward: "So it's not just about me?"Bella: "No. [pause] Sorry."