The Duchess of Cambridge conducted her first solo engagement as a royal on Wednesday and had a mark visible on her left temple -- a scar, NOT hair extensions. 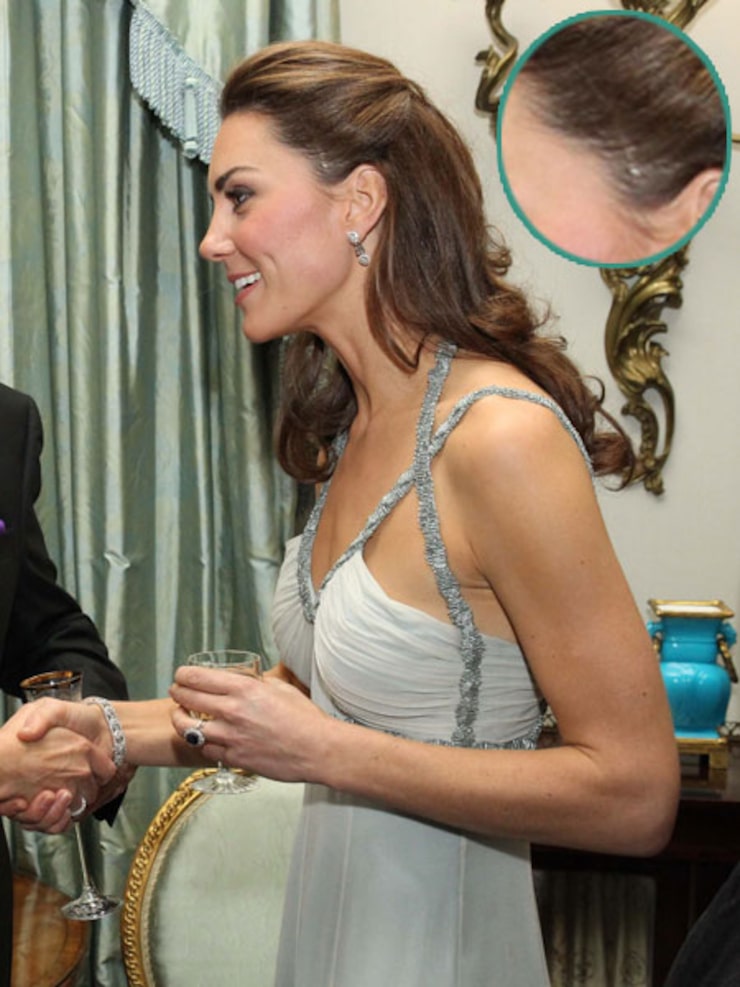 The Daily Mail first reported the mark was evidence of hair extensions, but are now saying it is a scar from a childhood surgery.

A spokesman for the Duchess at St James's Palace confirmed that it was the result of surgery as a young child. "The scar related to a childhood operation."

The palace declined to discuss what kind of operation, but royal sources say it was "a very serious operation."

Prince William could not attend the event at Clarence House due to a trip to Riyadh to offer condolences to the Saudi royal family following the death of the Saudi Prince, Sultan bin Abdul-Aziz Al Saud, who passed away last week in New York at the age of 80.

At the age of 29, Kate will be the oldest royal bride.

The sheer dress that Kate modeled years ago at a St. Andrews University fashion show will be worth $160K after she is wed, even though it cost a mere $40 to create!

Middleton is an accomplished tennis player and a regular Wimbledon-goer with her mother, Carole.

Kate is allergic to horses, but her future in-laws own dozens of horses and are avid equestrians.

All in the Family

William and Kate are distantly related! They are 12th cousins once removed.

If the royal couple's first press conference is any indication, Kate wants to be called by her given name, Catherine, and not by her nickname, Kate.If she and William become king and queen, she will be the 6th Queen Catherine of England.

Kate may have scored her late mother-in-law's 18-carat sapphire and diamond engagement ring, but that doesn't mean her future brother-in-law, Prince Harry is left without an heirloom of his own. He reportedly inherited Princess Diana's Cartier watch.

Middleton and Prince William's courtship lasted for 8 years.Kate's "career," post-wedding will most likely revolve around Prince William's schedule.She has reportedly been assigned 4 bodyguards from Scotland Yard to protect her around the clock, as she adjusts to life in her new public role.