"Extra" chatted with Johnny Depp, Penelope Cruz, Keith Richards and Kirstie Alley at the "Pirates of the Caribbean: On Stranger Tides" premiere on Saturday at the Happiest Place on Earth -- Disneyland! 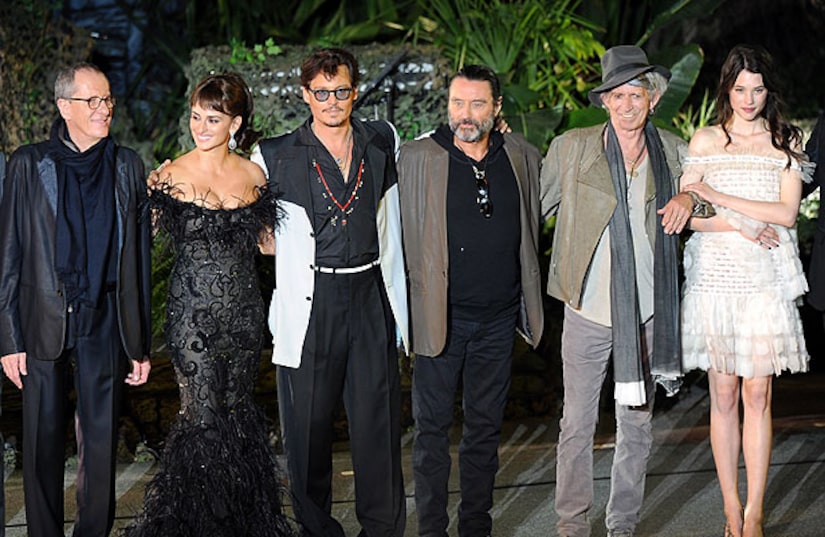 Depp told Terri Seymour he was happy to go on some rides with his children after the premiere. "Oh yes, absolutely," he confirmed. Johnny revealed he and good pal Steven Tyler are currently writing a song together. "We've been hanging out here and there. He's someone I've admired greatly for such a long time. The idea of writing songs with him is a dream come true."

Tyler, who recently released his autobiography, "Does the Noise in My Head Bother You?" had previously said he would choose Depp to portray him on the big screen. Johnny, 47, likes the idea and said, "I would give it a shot, why not."

The Aerosmith rocker confirmed he and Depp have been collaborating together musically and asked, "What else am I gonna do in L.A. in my downtime from 'Idol'?"

Terri also spoke with the lovely Penelope Cruz, who co-stars in the film -- her first appearance in the "Pirates" franchise. Cruz, who gave birth to her son Leo three short months ago, revealed the secret to staying trim. "I don't follow any of those strange diets. I try to have a healthy lifestyle. But I love food," she confessed. The new mom added, "I haven't done a lot of movies that are for the whole family. That makes me happy about this one."

Playing Captain Teague once more, rocker Keith Richards returned to "Pirates," and confessed, "When Johnny asked me to do this one I said, 'I've got one costume, why not?'"