Sarah Jessica Parker, Cynthia Nixon and Kristin Davis are gearing up for the return of "Sex and the City" to the big screen! 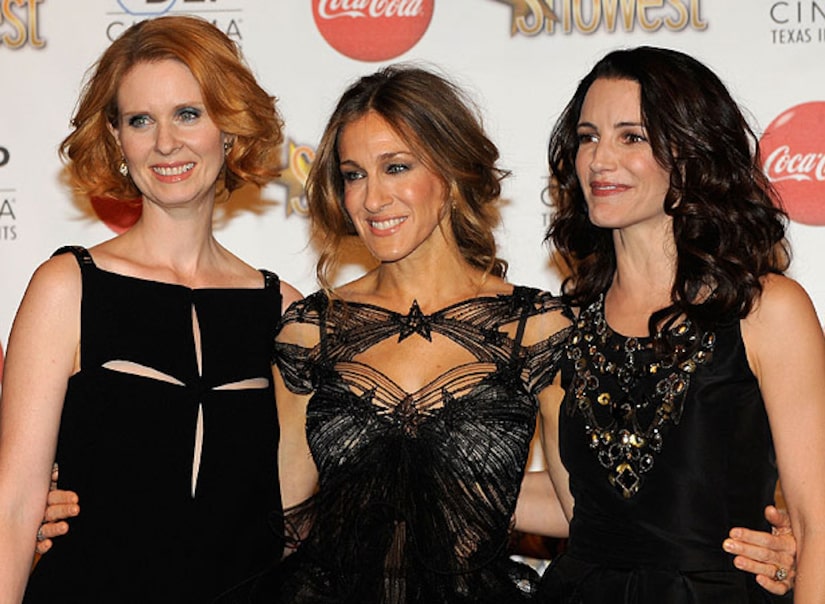 Looking fashionably in sync, the ladies -- minus fourth "SATC" member Kim Cattrall (who is in London doing a play) -- stopped to chat with "Extra" at ShoWest in Las Vegas, after winning the Best Ensemble award. "We didn't plan this," the women laughed about their matching outfits. "We telepathically communicate now... sending brainwaves across the country what we should be wearing."

"Extra" just had to get the deets on the highly anticipated sequel, in theaters May 27. Will Carrie break up with Mr. Big -- again? Will Samantha get a new boy toy? Is Charlotte's husband, Harry, cheating on her?

All Parker would divulge is that "It's a caper. It's fun!"

The women did talk about filming in Morocco for a good chunk of the film. "We shot about two thirds there," Parker said. "It was unbelievable."

"We worked 38 days straight in a row," Parker continued. "A lot of us were at the same hotels. We slept together, woke up together, drank coffee together."

Ah, to be a fly on those walls.