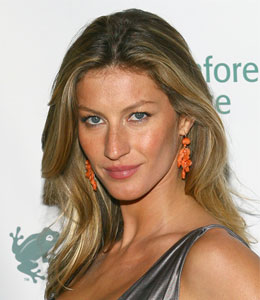 Super-private supermodel Gisele Bündchen gave birth to her first child in December, and she dished to a reporter that she had an at-home water birth!

In an interview with Brazilian magazine Fantástico, Bündchen said, "I gave birth in the bathtub," at the penthouse she shares with footballer husband Tom Brady in Boston's upscale Beacon Hill neighborhood.

Bündchen and Brady welcomed their baby boy on Dec. 8, but held off on naming him Benjamin until a few days later.

Brady said in a recent interview, "We thought we had a name picked out for about six months, and then about two days before he was born she said, 'I don't like that name anymore.'"