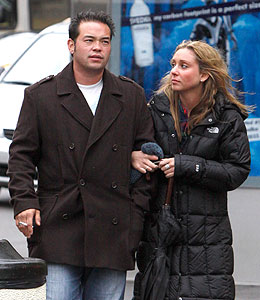 Hailey Glassman is calling out her ex this holiday season,

See Jon and Hailey during happier times, vacationing in France

"LOL-U are in Utah snowboarding w/'friends'-lol-ur redic," Glassman wrote on her Twitter page.

Gosselin told reporters earlier this week that he was planning on spending Turkey Day with his grandmother.

Jon's estranged wife Kate spent the holiday with her eight children -- along with her bodyguard Steve Nield, his wife, and their kids. Their celebration took place at the Gosselins' Pennsylvania home.

Check out some of Jon and Kate's nastiest fights

The final episode of "Jon and Kate Plus Eight" drew approximately 4.318 million viewers earlier this week.