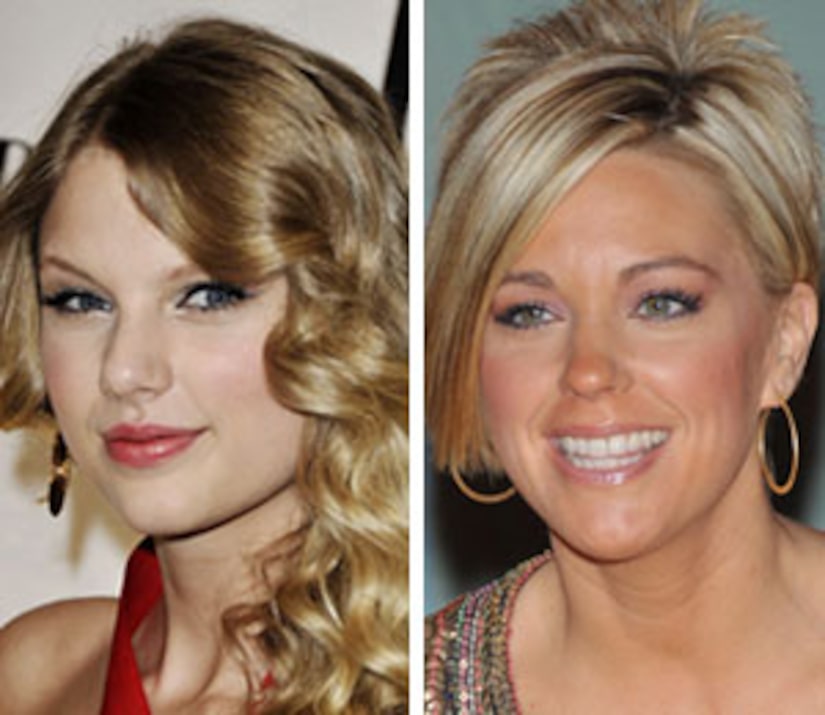 A week after Halloween, Taylor Swift threw on a Kate Gosselin wig to play the mother of eight on "Saturday Night Live."

Swift, as Gosselin, was the guest host on "The View" and was flattered by Elisabeth Hasselbeck's (played by Kristen Wiig) comments about her spiky bob hairstyle.

See other funny females on TV

"Kate, I just want to say, You have beautiful hair," Wiig said. "I've heard many people make fun of your hairstyle, and I think it's beautiful. It's like a gorgeous waterfall of human hair in the front, and in the back, a patriotic fireworks display."

Swift looked into the camera and responded, "It is. Actually, you know, the hardest thing about being a mom is having patience. 'Cause sometimes the paparazzi say they are going to be someplace at 10, but they don't show up until 11."

She later revealed how the hairstyle was created. Swift explained, "My hairdresser was halfway though giving me the 'Rachel,' when his blow-dryer exploded on the back of my head."

In the following skit, Swift mocked "The Twilight Saga" in the digital short titled "Firelight." The 19-year-old donned a long brunette wig and fell for a mysterious Frankenstein-like high schooler named Phillip.

Will Ferrell as George W. Bush

Will Ferrell as James Lipton

Will Ferrell as Alex Trebek