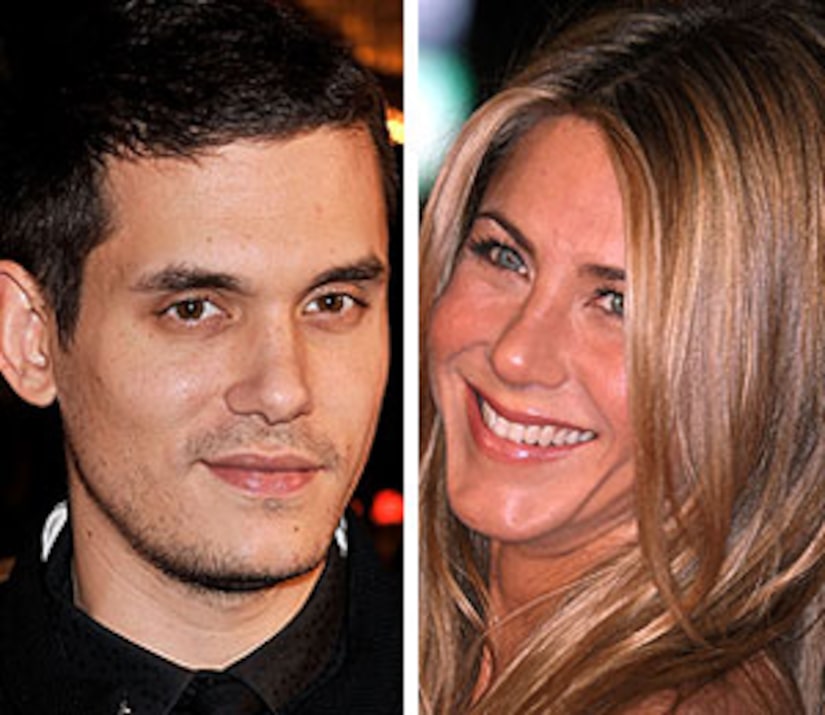 Jennifer Aniston wowed the crowds in a black Valentino mini at the premiere of "Marley & Me." Beau John Mayer was on hand to celebrate Jen's success -- and chatted to "Extra" about the Cake-Gate controversy, and his "Friend's" smokin' hot GQ cover!

"Cake-Gate is so funny," Mayer told "Extra" of the story surrounding Jen jokingly taking sole credit for their Obama cake. "That was really good for me and for her." The "Your Body is a Wonderland" singer revealed that he told Jen to watch the story. "I said, "You gotta see this. It's hilarious."

Mayer continued, "It's a fresh piece that you did for television that's really, really funny -- it's the kind of stuff I want to do on my show." Jen's take on the story? "It all ironed itself out," she told "Extra."

With their baking debacle behind them, the couple can move on to other topics -- like Jen's hot, patriotic photo shoot for GQ! "I wasn't naked," Jennifer dishes to "Extra", continuing, "I actually had a whole outfit on. They photoshopped...the bejeezus out of me."

Her Grammy-winning man had a different take on the sexy photo shoot. "The last thing you're gonna take issue with is, 'I'm just having a hard day with this cover.'" John said. If you have a problem with that cover, go make bagels!"

According to John, the actress is not only gorgeous -- but has a great singing voice to boot! "Do you know that girl can sing? I think she could do 'This Light of Mine' and kill it."

Jennifer didn't want to do an impromptu, red carpet concert -- but she did take the time to answer an "Extra" fan question about her long, wavy locks! When asked if she'd ever consider cutting her hair, Jen admitted, "I've actually had really short, short. It's not my best look."