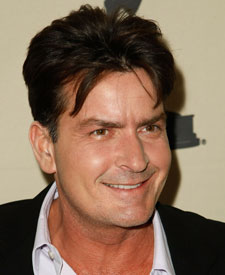 Charlie Sheen has issued this statement through his rep, Stan Rosenfeld, regarding his ex-wife Denise Richards' recent visit with "Larry King Live."

"Statements contained in an email sent from Denise Richards to my fiancée Brooke Mueller on April 3, 2007, are a blatant contradiction to her statements made on "Larry King Live," Monday, May 19. 2008. Her claims that her email has been fabricated or altered in anyway to create this story are absurd. The mere fact that she continues to publicly discuss and harass both Brooke and me three years after our separation, which for the record is longer than the actual length of the marriage, is beyond desperate and speaks volumes."

The statement continues, "I will no longer sit back and be egregiously painted as a liar. If any proof can be established that these are not in fact her words and statements verbatim, I openly invite her and would even encourage Ms. Richards to sue me in a court of law. She had an opportunity to tell the truth. She did not."

"Extra" has obtained a copy of the e-mail Charlie Sheen claims that his ex, Denise Richards, sent to his current fiancée, Brooke Mueller, in an attempt to obtain a sperm sample to conceive another baby by Sheen.

Why Andy Dick Was Escorted off Jimmy Kimmel's Stage 7