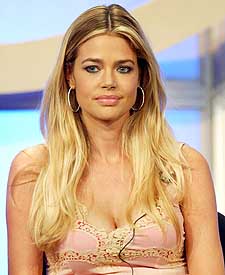 Denise Richards was stone cold silent to "Extra" cameras outside of "Larry King Live," just minutes after her sit-down with the interview king. While Richards was on the hot seat with Larry, she took aim at ex-husband Charlie Sheen, saying, "He's a stranger to me." Then she fired back at implications that appearing on her new E! reality show, "It's Complicated," would do harm to her two children with the actor, who didn't want them appearing on camera. "They are featured on the show," said Denise, "they are definitely not being exploited."

Charlie has told "Extra," "She continues to reveal what type of person and parent she is through her behavior."

The 37-year-old actress also nixed rumors that she wanted another child with Sheen -- or even just his sperm as a donation. "I have nothing against Charlie's sperm," said Richards, "but I don't want any more of it."

Charlie, who just jetted to Mexico with bride-to-be Brooke Mueller, recently told "Extra" that he's looking toward the future. "Some days the world is upside down and there's nothing you can do," said Sheen, "it's a slow process."