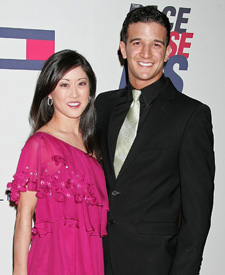 Kristi Yamaguchi has iced out her competitors once again on "Dancing with the Stars" -- proving that she's more than just a skating champ! Yamaguchi, the early front-runner in the competition, has some competition in Cristián de la Fuente, whose sexy Samba last night was clearly the show-stopper.

This week's twist on "Dancing" -- the random choosing of dance picks -- proved to be a winner for Olympic champ Yamaguchi, who was praised by judge Bruno Tonioli for "the cherry on the icing on the cake of the sweet, delicious Jive."

Jason Taylor's elegant moves gained high marks for his Foxtrot and classic Paso Doble, but didn't quite ignite the crowd and judges in the same way as Yamaguchi and de la Fuente. Broadway star Marissa Jaret Winokur didn't fare as well, earning 26 points for both her Quickstep and her Rhumba, which judge Carrie Ann Inaba labeled as "boring."

Find out who won the most votes -- and who'll be swept off of the floor -- tonight on ABC.