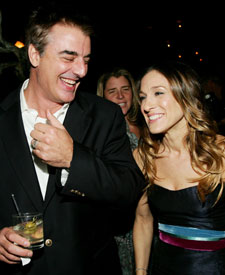 It's Carrie and Big's romantic Big Apple honeymoon -- locking lips at Rockefeller Center, canoodling at the plaza and videotaping in the bedroom! It's "Sex and the City" re-imagined for the pages of "Vogue" -- and brought to life by photographer Annie Leibovitz!

"Extra" is behind the scenes for every seductive shot with the "City" lovebirds, Sarah Jessica Parker and Chris Noth -- big fans of each other on and off the screen. "I love working with Chris," says Parker. Noth agrees, and admits that it's Parker who puts him in a good mood. "I tend to be crabby," says Chris, "she's like the bright blue sky and I'm like the muddy river."

The twosome poked fun at each other throughout the photo shoot. "He has a new baby and I've learned that he's actually deep and soft and kind and cares about someone other than himself," jokes SJP, "it's kinda shocking to witness." Noth's reply? "Pay no attention to this interview," he says.

The June issue of "Vogue" hits newsstands this week.