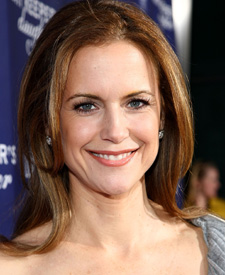 She is John Travolta's real-life leading lady, good friend to Tom Cruise, devoted mother to her two children, and admittedly obsessed with Target -- and now "Extra" is going one-on-one with Kelly Preston.

The actress opened up to "Extra" host Dayna Devon in a recent interview about her life on the Hollywood A-List -- including her secret on how to make a Tinseltown marriage survive. On her 17-year marriage to Travolta, Preston said, "We don't really live in L.A. -- we live in Florida. We've got our kids, do a lot of very normal things... ride golf carts, swim, rollerblade. We try to keep the family together as much as humanly possible."

The acting bug must be in the DNA -- Preston reveals that daughter Ella has already been bitten! "Ella, Johnny and I just did a movie together that'll be out next year called "Old Dogs" -- had the best time," says Preston.

Kelly isn't worried about the negative influences of Hollywood affecting her daughter. "It's all about choices, about instilling values. We don't do drugs. I don't drink... so she's not around a lot of that, so I don't think she'll be as tempted to fall into that."