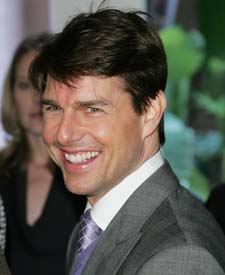 It's Oprah and Tom Cruise, back on the couch for part two, as he talks about his various roles -- and the one that he focused on more than any other -- proud papa -- as he beams about little Suri.

"I'm amazed," Tom shares, "she likes to dance and sing, get her nails done with mom -- really beautiful." Perhaps the tyke got her vocal skills from her father, who confirmed the rumor that he really did sing to wife Katie Holmes at their lavish Italian wedding.

Cruise's appearance on the show marks his 25th year in films, beginning with his breakout role in "Risky Business." Cruise received video congrats from his star-studded friends, including Spielberg, Hoffman, the Beckhams and the Smiths!

Catch the second installment of Oprah's interview with the Cruise today on ABC.